The concluding talk of the series was by Gabrielle Donnelly who gave a most informative and entertaining presentation on literary aunts, beginning with Aunt March from Little Women. Not often talked about, Gabrielle was inspired to examine Aunt March after Angela Lansbury’s iconic portrayal in the Little Women Masterpiece series.

Gabrielle maintained that Aunt March was a very interesting character despite her small role in Little Women. What we know of Aunt March is that she is the aunt of Mr. March, and that her family is quite grand and rich. She is elderly and childless; described as a peppery old lady.

Lis Adams, Educational Director of Orchard House, believes Aunt March may have been based upon Louisa’s great Aunt Scott (born Dorothy Quincy) who died before Louisa was born, but whose legend loomed large in the family. She was a beauty in her youth and married Governor John Hancock, becoming a pillar of Boston society. When Governor Hancock died, she married Captain Scott. Dorothy Quincy Hancock Scott was a very forceful lady, much like Aunt March. Lis described an intimidating meeting between Aunt Scott and a young Bronson Alcott when he had become engaged to Abba (which he described in his journal in great detail – she apparently approved of him and invited him back). She was described abrupt yet sincere, acting much like a queen. She could be quite peevish; she was very independent.

Learning about Aunt March through the sisters

We can learn more about Aunt March through her relationships with Meg, Jo, Beth and Amy; Gabrielle described how Aunt March gave each girl what she needed.

As Jo’s godmother Aunt March was straightforward with Jo. She gave her access to her vast library which was incredibly important for Jo. She provided her a daily battleground for Jo to fight against her anger and impatience; one can imagine that whenever she was with Aunt March she bit her lip the entire time. Aunt March also supplied Jo with interesting anecdotes concerning her eccentricities (including the parrot). There was always something going on at Aunt March’s providing Jo with many stories that she could put to use.

Aunt March made it possible for Jo to earned needed money for her family . She taught Jo hard yet valuable lessons about her tongue by not sending her to Europe. Inadvertently this keeps Jo at home, closer to Beth in her time of need. When Aunt March passes away she bequeaths Plumfield to Jo which gives her financial status with her husband Professor Bhaer. Plumfield also gives Jo the opportunity to help society. 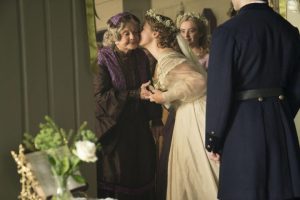 Aunt March’s one dealing with Meg was very important as she “settled the question” regarding whom Meg would marry. One of Meg’s major tasks in Little Women was to embrace poverty. She was old enough to remember her family being rich and she hated being poor. Whenever she tried to enter the world of the wealthy, something bad always happened. Early on she wore high heeled shoes for the New Year’s party and sprained her ankle. At the Moffats she was dolled up and all hell broke loose. The same was true when she bought the silk material for the dress – every time she was given something nice from the world of wealth, it was subsequently taken away from her. The irony of it all was the fact that she chose to marry a poor man considering the fact that she associated with wealthy girls who had eligible male friends. Meg was charming, very pretty and she came from a good family so it would have been easy for her to have married “up.” Instead she married John Brooke and therefore embraced poverty. And Aunt March was instrumental in that decision.

When Laurie  proposed that he and Amy “row together,” he established that their marriage would be one of equals. Professor Bhaer came to Jo with an open heart and “empty hands” and she filled them with hers: again, equal to equal. John Brooke’s proposal however, was odd: “I’d like to teach you to love me the way I taught you German.” Meg was given pause by this and almost refused him. Aunt March’s objection to John because of his poverty and lack of pedigree threw everything into perspective for Meg and she sided with John. She firmly told Aunt March she wanted to marry John in part because he was poor; thus she embraced poverty.

Aunt March’s dealings with Amy were far more direct. Amy too wanted the nice things of life but unlike Meg, was allowed to have them. She would have her own way, wearing pretty dresses and marrying a rich and rather sexy young man (which allowed her to live in luxury). Aunt March was responsible for a lot of this. The first encounter was when Amy was sent to Plumfield after Beth caught the scarlet fever. Instead of uncomfortable meetings with Aunt March, Amy was shown to be wandering through the big house at will and enjoying all the beauty. She met Estelle the French maid who shows her Aunt March’s jewelry and told stories of Aunt March’s youth. We learn that she was a beauty, that she was happily married, and that she lost a child in infancy. In the end Amy pleased Aunt March such that she was given a ring to take home with her. Mr. March had admired Meg’s worn, calloused hands; he admires also, Amy’s ring. It is symbolic of the destinies of these characters.

Another influence of Aunt March came again through Estelle, who helped Amy construct a Catholic chapel complete with a rosary and a painting of the Madonna (a Protestant Bible was also on hand). Louisa had ambivalent feelings about the Catholic Church, horrified yet attracted to the mystical rituals, the pomp and circumstance. Gabrielle described it as “sensual” (which I interpret to mean mysterious), and good for story lines (such as Alcott’s thriller, The Long, Fatal Love-Chase with the priest as a virtuous hero). She believes the message implied was that Amy would also be sensual, always surrounded by beauty. Aunt March helped to make Amy the best that she could be, sending her to Europe and giving her drawing lessons. Amy of course, attracts the attention of Laurie and lives happily ever after.

It is a curious thing that Aunt March had no dealings whatsoever with Beth. There were no recorded conversations; the only place where they were seen in the same room was at Meg’s wedding where Beth is hiding behind her mother, refusing to talk to anyone. Early in the book Beth’s frustrations with the old family piano are described, hinting that it would have been nice if Aunt March had noticed and tried to help. Someone however, does come to help, giving Beth a piano while helping her to overcome her shyness; Mr. Laurence is elderly, gruff, wealthy and imposing like Aunt March, but unlike her, takes notice of Beth. Gabrielle suggested that Aunt March was not the one to help because Beth was being groomed to die while the other three were being groomed to live. Aunt March was a symbol of life, maturity and the future, and Beth was kept away from her.

Aunts are family – they know the family stories and keep the family history alive. They are not, however, a parent. This provides an opportunity to see the aunt as a person in her own right while she will see you in the same way. Aunts began to populate literature mostly after the Industrial Revolution which drove families into the city and made aunts more important.

Gabrielle Donnelly is a journalist writing about show business for a variety of periodicals. She is a member of the Hollywood Foreign Press Association. She is the author of 5 books including The Little Women Letters.