Excitement is building as details are revealed about the upcoming Little Women series on PBS’ acclaimed Masterpiece. It will air on May 13th and 20th at 8 p.m. EST. 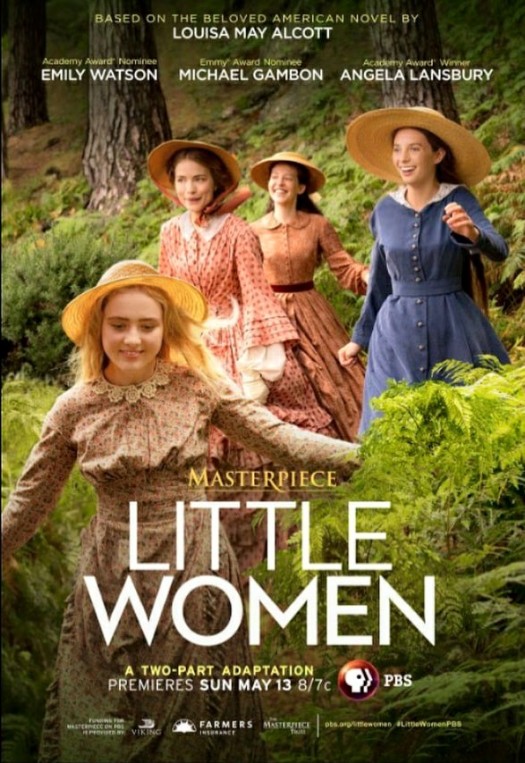 I have pre-screened the series and will write more about my impressions as we come closer to the air date. I also have an exclusive interview with the screenwriter, Heidi Thomas, done by Gabrielle Donnelly, author of The Little Women Letters. I will be posting that the week of May 7th.

In the meantime, I’d like to share some impressions from the recent documentary that aired on PBS called “Little Women A Timeless Story.” There’s a wonderful video on YouTube giving a sense of what happened behind the scenes.

The documentary, hosted by Rebecca Eaton, executive producer of Masterpiece, was filmed in Bronson Alcott’s study at Orchard House (and I couldn’t help but notice that May’s portrait had been replaced by Louisa’s from the dining room. 🙂 The documentary includes interviews with executive producer Sophie Gardener, director Vanessa Caswill, screenwriter Heidi Thomas, production designer Susie Cullen and costume designer Eimer Ni Mhaoldomhnaigh along with several of the actors who all describe the direction taken by the series. It is as much aimed at readers who have grown up with Little Women as it is towards inviting new and younger ones into the story.

A book for all ages

All believe that the story still resonates because the book was ahead of its time with the sisters having ideas of their own. It grows up with the reader. Eaton shared of how she came to understand the older women in the book, especially Marmee, when she read it again as an adult. The book tackles a universal idea, that of the journey of women trying to make it in this world.

To emphasize the realism of the book, the series begins by showing scenes from the Civil War. While Marmee is reading the letter from Mr. March to his daughters, we see him performing his duty with the soldiers. We then meet the girls: Meg, who remembers the family’s previous wealth and has a hard time adjusting to their new life of work and need; Jo, who wants to make her mark in the world through her writing; Beth, who is well loved by all but struggles with her fears of the outside world, and finally, Amy who also wants to make her mark and to keep up with said world. Their lives revolve around family, loss, heartache and growing up.

Inspiration for the series

Sophie Gardener, executive producer, who loved the book as a girl, read it to her daughter last year and then suggested it for the BBC to produce. Gardener asked Heidi Thomas to write the script, feeling that Thomas could not only demonstrate reverence for the book but also show justification for a new adaptation. Annes Elwy, who plays Beth, thought that the script brought out the heart of the story, delving deeply into the truth of everyone’s situations and characters.

Modern treatment of a classic

Gardener remarked that in Thomas’s script, Marmee is shown “as a single mother for atime in an uncertain world holding together four emotionally-charged teenagers more or less on her own without masses of money.” She feels that Thomas’s treatment “makes it feel quite modern because of the focus on the developing girls as they grow into women; to try and become the best versions of themselves.”

Thomas wanted to explore the darker emotions and more complex sentiments of the book. “The spirit of the novel is not wrapped up in a tartan bow; it’s something earthier; it’s often something sadder. It’s a book full of wisdom — you can’t really experience Little Women without going through the emotions of grief, loss and confusion and choice, making that something all women go through.”

Finding the right director to bring it to life was crucial. The unanimous choice was Vanessa Caswill who recently directed “Thirteen” for BBC 3 and BBC America and was highly commended at the Broadcast Digital Awards, having been nominated for best mini-series of 2017. She wanted to bring an intimacy to the production with the camera “feeling like another sister.” Production designer Susie Cullen remarked how Caswill brigs “a real freshness” to the script and make the girls as real and as contemporary as possible. “She did not want to do a sanitized version of the story.” An example of that reality is a conversation between Jo and her father and how she felt justified in wanting to write to pay the bills whereas to him, the money was inconsequential.

Impressions of the actors

Kathryn Newton, who plays Amy, described the intense rehearsals which caused each of the actresses to become deeply rooted in their roles. “I came to understand my character better than any roles I had ever played,” she said.

Maya Hawke, who plays Jo, shares her unique connection to the book. Growing up dyslexic, Little Women was the first grown-up book that she read cover-to-cover. Hawke describes Jo as “taking responsibility for her own education through writing.” Developing a kinship with Jo, this gave the actress the wherewithal to learn how to read. She characterizes Jo as “wild, liberated and free, someone with ambition. Jo wants to break boundaries. Yet her ambition is not stronger than her love of her family.”

Moving on to Laurie, Rebecca Eaton describes him as the quintessential boy next door. “Both he and Jo reject what is expected of them, launching into each new day with a childlike wonder.”

“Laurie Laurence is iconic,” said Thomas, “and I was really scared of playing a part in casting that role simply because there are probably 10 million women whose first love was Laurie Laurence and therefore 10 million versions of that character in the common mind.”

Jonah Hauer-King was chosen to play the role. “Jo is the greatest friend Laurie ever had,” he said adding that she is also only the second woman that he’s ever loved (beside his mother). Their friendship filled a longing he had had for a new female presence in his life. 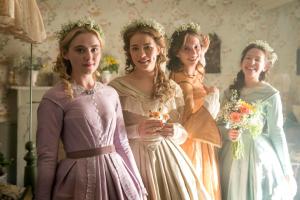 Costumes were designed with simplicity in mind. “All the dresses were handmade for the production,” said costume designer Eimer Ni Mhaoldomhnaigh. “The idea was simple elegance for the girls, even with little money.” Thomas described the costumes as “clothes,” adding that “Each girl has their own individual palette.”

“It’s very much about individual characters and creating their separate personalities through costume,” said Mhaoldomhnaigh. For example she described Jo as “somewhat androgynous” and a tomboy so the clothes reflect that in her.

Although the setting is Orchard House, the filming took place in Ireland. Many elements of the historic museum home figured into the sets. The outside of the home was landscaped with many New England flowers.

Hopes for the series

Gardener has high hopes for the series. “Ultimately you just fall in love with the characters. There will be a girl that you will want to be. It will be a family that you will want to be part of. I think that warm beating heart is ultimately what makes the novel sustain and what I hope will draw in a whole new generation of people to the novel but also to be a wonderful reward for those older people in the audience who have loved the novel for many years but would like to see it done with a modern sensibility.”

Angela Lansbury, who plays Aunt March, calls the book a classic story. “Family counts for so much and that’s what this is about,” she said.

“I feel this production is full of love,” said Thomas. “We love the book; we love the characters; the actors love each other. We offer it up to [the audience] as a gift, and we just hope people love it as much as we do.”

10 Replies to “A blend of reverence and relevance: Previews of the Little Women Masterpiece series”