“What fun we had this evening when Louisa May Alcott came to visit her childhood home at Fruitlands!”

It was indeed great fun taking in the living history performance by actress and historian Marianne Donnelly at the Fruitlands Museum Vistor’s Center. Her bigger-than-life portrayal of Louisa May Alcott was a sight to behold.

Donnelly beautifully captured the awesome life force of Alcott along with her flair for the dramatic and sharp sense of humor.  It was not hard to imagine her as Louisa with her rapid-fire delivery, engaging the audience at every turn. 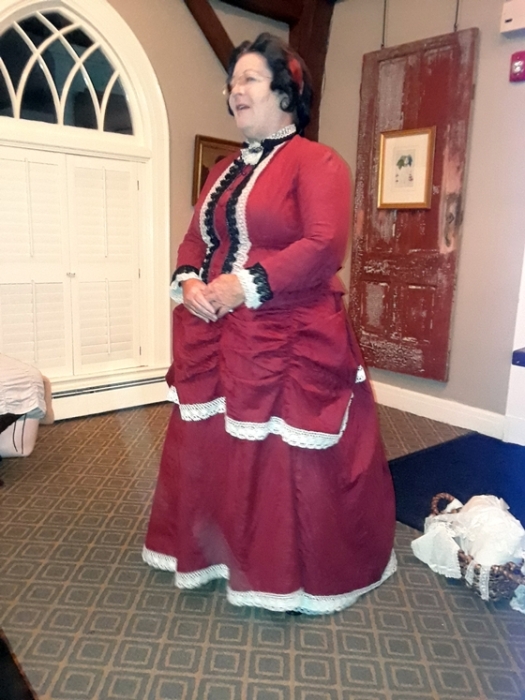 “Louisa” opened the program with a vivid commentary regarding the women of Concord participating in their first election (that of school committee). As the first woman to vote in Concord, she shared her pride, citing her mother’s own wish which she was unable to fulfill. With typically Alcottian sarcasm and humor she voiced frustration at the narrow mindedness of the people of the town. She reminded us of the work ahead for women’s suffrage which would take another forty years.

She then turned back the clock to 1843 when, at ten, she and her “consociate family” lived at Fruitlands. “Louisa” provided a colorful description of life in the failed Utopian community (the vision of Bronson Alcott and Charles Lane) which included its eccentric family members, cold showers, and insufficient meals of apples, bread and water accompanied by the tedium of endless metaphysical conversation. Donnelly’s imitation of Charles Lane was priceless, feigning the grim expression so evident in the one surviving photo of the English Transcendentalist. She captured both the insanity and the poignant human drama of Fruitland to the delight of her audience.

Moving ahead several years to 1862, “Louisa” entered into a more serious vein, recounting her time as a Civil War nurse. Using an adaption of her short story, My Contraband,” “Louisa” illustrated with brilliant fire her outrage with the institution of slavery as she described the mental and physical suffering of Robert (the contraband).

We were then treated to “Louisa’s” personification of Sairey Gamp, a favorite Dickens character used to entertain her patients. A brave audience member volunteered to help with the skit.

After sharing with us the price she paid for her service (typhoid pneumonia and chronic ailments due to mercury poisoning) she concluded by leading us all in a solemn and lusty rendition of Julia Ward Howe’s “Battle Hymn of the Republic.”

“Louisa” wrapped up her program taking questions from the audience. We asked her to choose those books of hers that were her favorites (Moods, Work, and her potboilers). We inquired about her romance with Ladislas Wisniewski (and she shared how he and Alf Whitman made up the character of Laurie in Little Women). We asked about Bronson and whether she in fact understood her father’s transcendentalism (“No!”). She shared many other personal anecdotes and reminded us that she was not at all ladylike (and damn proud of it).

Donnelly answered questions about her own colorful life which made me think that Louisa would have found many a wonderful story to tell drawn from Donnelly’s rich experiences.

It was a magical evening in the presence of the “great lady.” Marianne Donnelly is available for her living history performance of Louisa May Alcott and would love to hear from you. You can write to her at mdonnelly00@gmail.com. Here is a video of one of her performance:

A big reveal is coming ….

Last night I made an announcement to the audience of a big reveal coming soon on this blog. I have been made privy to an exciting discovery from a local scholar … details coming, stay tuned!

3 Replies to “Living history – Marianne Donnelly as Louisa May Alcott”