Ever long to go to school as a child in a one-room schoolhouse? Sound romantic?

The school of Bronson Alcott’s childhood

Madelon Bedell in The Alcotts: Biography of a Family described the nature of school in the days of Bronson’s childhood (early 1800s in Connecticut). If you were a child, would you want to be where: 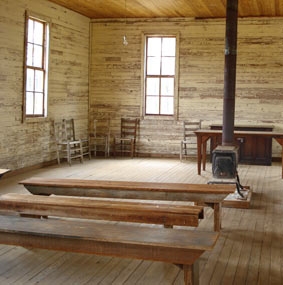 Not an inviting place

Bedell said it best: “Such was the famous one-room schoolhouse of early America, a place where children were considered, in Jonathan Edwards’ favorite phrase, to be ‘young vipers,’ and in the words of a satire of the times, were taught ‘not to read, but fear and tremble …” (The Alcotts Biography of a Family, pg. 10).

The object of school was to cram facts into the minds of the young. Everything was about memorizing, not about understanding.

Maybe Bronson’s idea of the one-room schoolhouse would intrigue you:

Ahead of his time

This was Bronson’s first classroom in Cheshire, CT. Even though educators came from all over to see it (and one proclaimed it “the best common school in the state—probably in the United States”) local parents did not understand and eventually switched their children to other, more typical schools. Bronson was seen as having too much influence over their children because he took the time to relate to them as cherished human beings.

The herald of greater things to come (the Temple School) and a most opportune meeting (Abba Alcott because of an invitation by brother Samuel Joseph May).

Many of Bronson’s “crazy” educational ideas were eventually incorporated into reforms enacted in the late 19th and 20th centuries.

Sometimes I wish I could have experienced Bronson Alcott as a teacher. He must have been amazing.