One of Abigail Alcott’s best friends was author and abolitionist Lydia Maria Child. A successful children’s author in the mid 1800s, Child is best known for a poem about Thanksgiving, part of which is set to music:

Here is an image from her three volume book called Flowers for Children, of the first few stanzas: 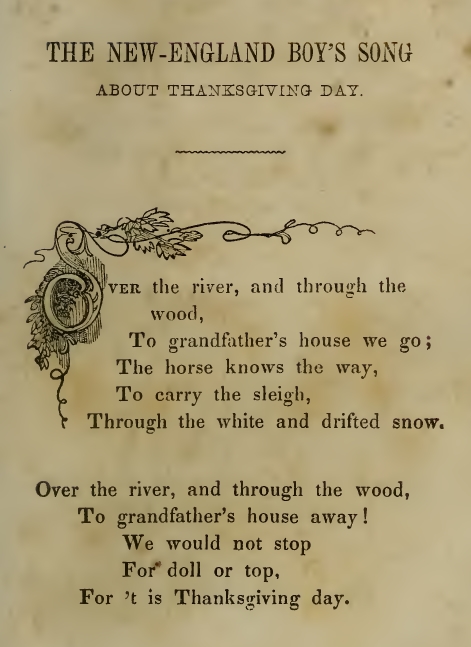 You can read the entire poem here.

Undoubtedly the Alcott children had to have read Child’s works since the families were so friendly with each other. Flowers for Children, a collection of Child’s favorite stories and best known articles from her successful juvenile magazine, The Juvenile Miscellany, contain moralistic stories for children. Didactic tales for youngsters were the norm for the day and Louisa was influenced by them in her own writing for children.

Could this story have influenced Little Men?

In reading the first story, “The Christ-Child and the Poor Children,” I was struck by the many similarities between this story and Little Men. “The Christ-Child and the Poor Children” is the story of a group of very poor and disadvantaged children, some of whom are turning to crime. Heinrich and his little sister Gertrude come from a dysfunctional family where the father is a mean drunk and the mother taken to fits of insanity. Wolfgang is the neighborhood bully. We encounter the Christ-Child at Christmastime when Heinrich and Gertrude receive a rare gift of money; they purchase apples, nuts and green boughs to create a Christmas tree. Gertrude offers thanks to the Christ-Child for providing the means. Unfortunately, Wolfgang spoils everything by stealing the apples and nuts from the children.

The gift of money had been provided by an older man who runs a home for orphans with his wife. Eventually the three children become a part of that home, working at trades to earn their keep and contributing to the family home. Heinrich and Gertrude’s parents eventually join them. Wolfgang struggles with trying to resist his formerly evil ways and falls from grace on numerous occasions, only to be forgiven and taken back by the community. Eventually he reforms his life.

I’m sure already you can see the similarities between this story and Little Men. For me,

Undoubtedly, stories like “The Christ-Child and the Poor Children” were a common part of the reading diet of the Alcott children. It just struck me as amusing that the very first story I pick up mirrors Little Men in so many ways.

Many of you are far more knowledgeable than I am about the
didactic literature of Louisa’s time, and the influences on and origins
of Little Men –
What other stories might have influenced Louisa May Alcott in her writing of juvenile tales (besides her own)?