Because a children’s book opened the way to my passion for Louisa May Alcott, I am always interested in reading other accounts meant for children. So when I came across Beyond Little Women A Story about Louisa May Alcott I was eager to read it. It was published in 2004, written by Susan Bivin Aller and illustrated by Qi Z. Wang. 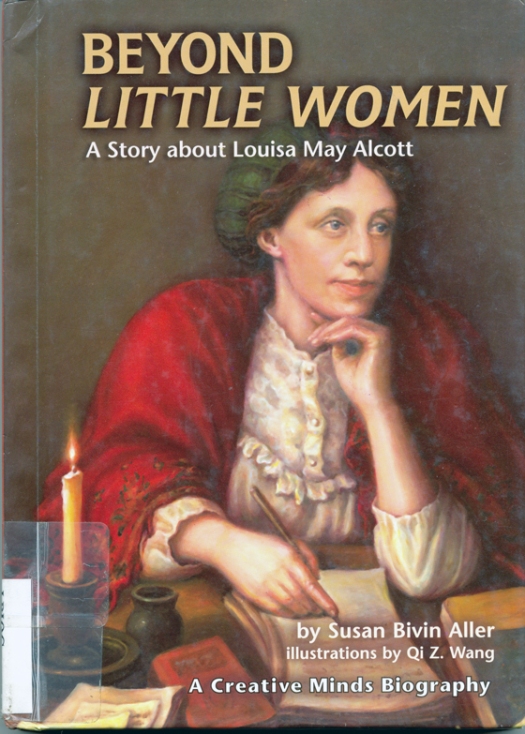 Classified as “Juvenile Biography” the book is written as a narrative, laying out the story of Louisa May Alcott mainly as a writer. In general I enjoyed the book but unfortunately, the very first line in chapter one is in error: “Four years old today!” Aller is referring to the infamous incident at the Temple School when Louisa was celebrating her birthday and had to give the last plummy cake to one of the other children. It was her first bittersweet lesson in self-sacrifice; the reward was a kiss from her mother.

The problem is that Louisa was three, not four, when this incident occurred. The author also cited Bronson’s age incorrectly (at least the mistake was consistent). Such an obvious error is off-putting but putting that aside, I found the book improved once Aller started describing Louisa’s writing. She did a good job of summarizing Louisa’s rather complex career beginning with writing for magazines, her “blood and thunder” tales, her first novel Moods, her first success with Hospital Sketches and then the move to children’s literature as editor of Merry’s Museum and finally, Little Women.

Description of the vortex

Aller is the first writer I’ve seen describe Louisa’s vortex in a way most could understand: “When Louisa was captured by an idea, she wrote almost nonstop for days. It was like being in the center of a whirl of ideas that she couldn’t escape until the work was finished.” She went to say that “These tremendous bursts of writing, followed by physical collapse, became Louisa’s typical pattern.”

She did a good job of explaining how Louisa came to know of her true writing voice with the popularity of Hospital Sketches: “The lesson to Louisa was clear. Writing from her own experience, about things she knew, was going to be the key to her success as a writer.” Little Women was the successful outcome of that lesson. However, Aller left out a key fact about Hospital Sketches: that it was born from letters Louisa wrote to her family about her Civil War experiences. Letter writing the vehicle by which Louisa found that voice.

As a means of expression

Her explanation for the “blood and thunder tales” (and the need for the “made-up name” of A. M. Barnard) was simplistic but true. She briefly touched upon Bronson’s insistence that Louisa tame her emotions in order to become more “feminine;” Aller writes, “If she had to repress her true feelings in everyday life, then she would have to unleash them somewhere else.”

In general the narrative was organized in a logical fashion and flowed well. The storytelling however, was dry. Louisa May Alcott is of interest to so many because of her own stormy personality and her passion for justice for the downtrodden, especially women and slaves. Very little of this spark and passion came through in the text. A child could read this book and come away with the facts but I’m afraid the inspiration would be wanting.

The illustrations by Qi Z. Wang were wonderful and in some cases, filled in that gap of spark and passion. The resemblance of Louisa in the drawings to her photographs was very accurate. You can see samples here.

I enjoyed reading Beyond Little Women and would recommend it with the stipulation that children read other biographies and certainly sample Louisa’s books.