This was the day I was waiting for.

Ever since I started reading Eden’s Outcasts: The Story of Louisa May Alcott and Her Father, I have been dying to talk to John Matteson.

His penetrating insights into Bronson and Louisa have forever changed the way I look at them (most especially Bronson).

In my opinion, he is the only biographer I’ve read who commands an understanding of spirituality, a necessary part of the puzzle when analyzing the life of the complex, often exasperating Bronson Alcott.

Matteson has referred to Bronson as a mystic. Mystics often teeter between sanity and madness; Bronson certainly fit that description. 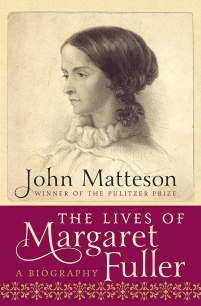 The Lives of Margaret Fuller

Since writing Eden’s Outcasts, Matteson has released a new book called The Lives of Margaret Fuller.

Fuller, probably the most intellectually brilliant of the transcendentalists, has largely been ignored. Yet her treatise on women’s rights, Woman in the Nineteenth Century, inspired many feminists including Susan B. Anthony. Fuller’s book was the first major feminist work in the United States (source: Wikipedia).

Links between Louisa May Alcott and Margaret Fuller

He thus used his lively presentation to discuss his two favorite ladies, Louisa and Margaret, and the ties between them.

Louisa and Margaret didn’t actually know each other. Twenty-two years her senior, Fuller had left Concord by the time Louisa was twelve.

But they had met. There is a bit of lore from Eden’s Outcasts about the first meeting between the two in 1840 when Fuller was introduced to Bronson’s “model children.”

As the introduction was about to take place, those children came racing to the front of the house in active play. Louisa, acting the part of the horse, pulled the wagon carrying Anna (the proper young lady), Lizzie (the dog, barking as loudly as her little voice would allow) and baby Abby May. Upon seeing their father with Margaret, Louisa stubbed her toe and fell, dumping all the occupants out of the wagon. Much laughter ensued amongst the tangle of legs. Louisa’s mother Abba grandly announced, “Here are the model children, Miss Fuller!” (Eden’s Outcasts, page 209, ebook)

Louisa and Margaret may not have been friends or colleagues but they both had similar ideas about the right of a woman to determine her own destiny, and how this would benefit the greater community. Where they differed was in their approach. Margaret the philosopher favored cultivating oneself while Louisa the pragmatist, emphasized service. She believed a woman could still fulfill her duty while cultivating her intellect. 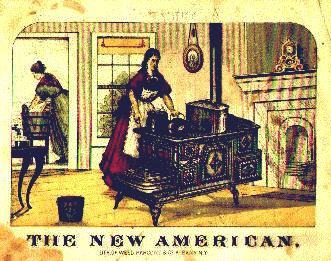 Providing a simple illustration, Matteson cited a letter Louisa had written in which she lauds housework as a great opportunity to think on and discuss high-minded topics. She herself often “simmered stories” while fulfilling her domestic duties.

Their vision of women’s rights

Both women agreed that women’s rights were not necessarily for the individual but for the community. It was deeper than gaining economic opportunities (although such opportunities certainly facilitated independence).

Both women also had fathers who were poor providers.

Persistent poverty and its consequences

Bronson’s lack of ability (some say desire) to provide financially for his family is legendary. He was incapable and unwilling to work for a living wage and the family was destitute for years.

Matteson remarked that the constant poverty gave Louisa a “depression-era mindset” where she obsessed over money, counting every penny. She overworked herself with constant writing long after the fame and fortune that came from Little Women. 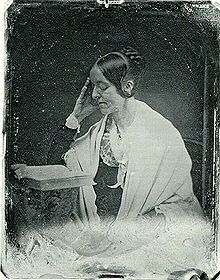 In Margaret’s case, it was a father who reneged on his responsibility to secure a will before he died. This left Margaret, her mother and her siblings at the mercy of her father’s brothers who took control of the property and finances, forcing Margaret and her family into the humiliating position of being dependent on them. Inevitably these legal problems deprived her of educational opportunities.

Rising above their circumstances

Despite these difficulties both women fought for a better life for themselves, their families and most especially for society. The education so generously bestowed on them by their fathers bore its fruit through the written (and in Margaret’s case, also the spoken) word. Theirs was a message of women’s rights, autonomy, and reform.

In the next post, I will detail Margaret and Louisa’s vision for women and the benefit to society as laid out by John Matteson in his presentation.

4 Replies to “My 3 days with Louisa May Alcott (part three): John Matteson talks about his two favorite ladies”

Author Lorraine Tosiello takes us on a tour of Louisa May Alcott's Boston. @ltosiello_author #louisamayalcott #historicboston #beaconhill
A MUST listen: "Let Genius Burn" latest episode featuring Daniel Shealy. This is an Alcott geek's DREAM. And I totally agree with his thoughts on the title of Little Women. :-) https://www.letgeniusburn.com/listen @letgeniusburn
I am giving an important 15-minute presentation on Lizzie Alcott on May 31st at 11 am as part of a LMA panel at the Bearing Untold Stories hybrid symposium. Registration is free but it closes tomorrow! Click on my profile for details.