Finishing up chapter V in the 1864 version of  Moods (“The Golden Wedding”), I walked away with two thoughts, regarding Louisa’s spirituality and her romanticized self in Sylvia Yule.

I want more than ever to write a longer treatise on the spirituality of Louisa May Alcott. Although she did not belong to any particular church or religion, her spirituality in many senses is similar to mine and I am a devout Roman Catholic. I would need to do a LOT more research on how Christianity was practiced and perceived in the 19th century (a daunting task!) because my sense is her way of looking at God was radically different from the way  every other Christian practiced. Obviously this is true because of Transcendentalism and my gut tells me that fear of God’s retribution was the major motivator rather than love of God. Because I have never studied Transcendentalism, I don’t believe I was directly influenced by it although it may be that  because this is New England, I may have been influenced by it in an indirect way. All I know is when I read Little Women, I was very taken by the spirituality of the mundane that Louisa preached (see my post on Amy) – that spirituality being that it was all in the details: how a smile, a gesture, a small sacrifice can be the key to true spirituality.

I see that same ‘preaching,’ so to speak, in Moods with Sylvia. I know that family was central to salvation for Bronson and for Louisa and this explains the beautiful descriptions of a caring family holding a 50th golden wedding anniversary celebration for their matriarch and patriarch. But this was the passage that particularly struck me (page 98, chapter V): 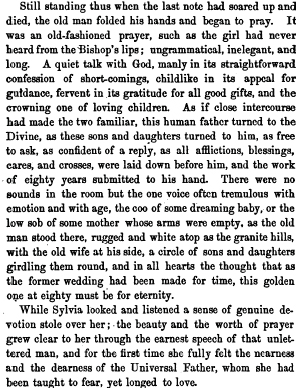 That passage caused me to recall Louisa’s own discovery of God in her teens after an early morning excursion in the meadow over Hillside.

I just did a little bit of reading about Saint Ignatius, the founder of the Jesuits and found a kindred friend. From what I could gather, his spirituality was often about finding God in the world. He also believed in developing the mind. I feel that Louisa did this also. Her practice of virtue often paralleled the spirituality of St. Thérèse of Lisieux and Blessed Mother Teresa – doing small things with great love.

I hope I can find the time to do the research, and the guts to tackle this subject. It’s yet the latest thing that draws me to Louisa.

In defending Moods in letters to readers (see previous post) it strikes me as a little odd how Louisa speaks of Sylvia as being a slave to her moods, almost speaking of her in a disparaging way. When I see how she describes her, I see a breath of fresh air – a young woman full of life and vigor, curious about everything, willing to step out and take changes, impulsive for sure, and creative in her thinking. I’m wondering if this is how Louisa would have liked to have been seen – decidedly different and accepted as such. It is easy to see why Moor and Warwick both fall in love with her, being different sorts themselves. Chapter V in particular has lovely descriptions of Sylvia: a dream version of a very complex and rather tormented woman. I have no proof of this at all but I’d like to think that Louisa, lost in her vortex, lived through Sylvia and found a temporary peace in that character (at least while the going was good!).

I am hoping, however, that the story line is going to begin to move on. I was surprised that 3 chapters were devoted to this camping excursion with Mark (Max), Moor and Warwick. It makes me think it was probably a good thing the book was edited! We shall see. 🙂