The other day I was trying to find the chapter in Little Women where Jo shares with Marmee her fears about her quick temper and couldn’t find it. No wonder! Yesterday I listened to chapters 7 and 8 from the audio book and found out that “Jo Meets Apollyon” was what I was looking for.

But who the heck is Apollyon and what did this character have to do with Jo and her temper?

A quick look on Wikipedia gave me my answer: Apollyon (Greek for the Hebrew “Abaddon”) was known in the Christian faith as “The Destroyer.”  Wikipedia says, “In the Hebrew scriptures, Abaddon comes to mean ‘place of destruction,’ or the realm of the dead, and is associated with Sheol (see, for instance, Job 26:6, Proverbs 15:11, Proverbs 27:20 and Psalm 88:3, among others).”

Now that made sense. And Chapter 8, so far my favorite chapter in Little Women (close behind are “Beth Finds the Palace Beautiful” and “Meg Goes to Vanity Fair”) does such a brilliant job of illustrating how Jo’s worst enemy, her temper, could quickly escalate to the point of totally undoing her, and how she found salvation.

Louisa May Alcott does many things well in her writing but the thing I think she does best is describe feelings in a way such that you step right into the character’s shoes and feel those same feelings just as intensely.

I was heartsick when I learned that Amy had destroyed Jo’s manuscript. How could she?? It certainly didn’t help me like her any better (she is, so far, my least favorite of the sisters). I could SO feel Jo’s grief and anger, and could really understand she couldn’t forgive Amy’s ‘revenge’ very easily. It was frightening watching her temper grow so quickly and morph into something so dangerous. When Amy fell through the ice, I could then feel Jo’s anxiety, guilt and deep remorse. It’s the kind of remorse that makes one feel desperate, despairing that life can ever be the same again, even though everything turned out fine in the end. 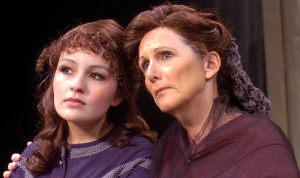 The crème de la crème, however, was the truly touching conversation she had with her mother, who startled Jo when she admitted, “I am angry nearly every day of my life, Jo, but I have learned not to show it, and I still hope to learn not to feel it, though it may take me another forty years to do so.”

I could feel the bond strengthening between mother and daughter, and the sweetness of that moment was beautiful. There’s nothing much richer than that kind of sharing between parent and child.

I think I get it now why Little Women was so wildly popular in its time, and is still popular today. Despite the fact that it is set in a past we no longer can relate to, there are many timeless truths that can apply to any time and place. Louisa, in fulfilling her obligation to her publisher, created a classic despite herself!

On to Chapter 9 . . . I so look forward to my evening commute, listening to the adventures of the March sisters!

14 Replies to “Jo Meets Apollyon – what does that mean?”