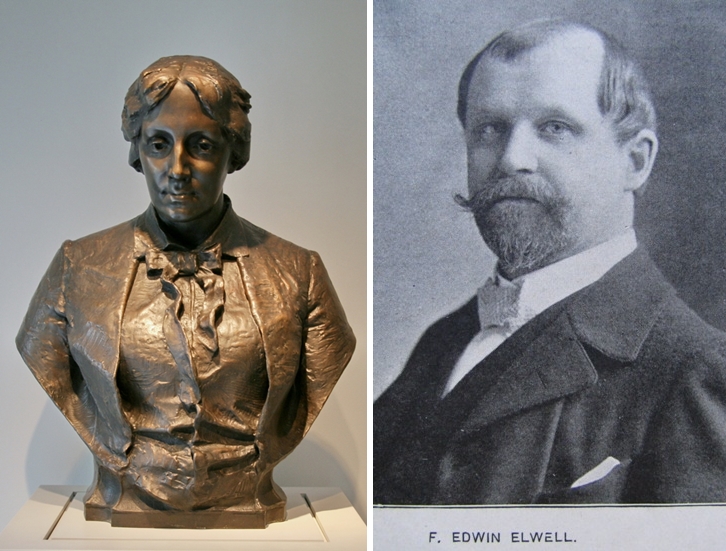 I am pleased to present this guest post by Lorraine Tosiello. With the May Alcott Nieriker conference coming up, it seemed appropriate to share this with you.

In 1878, Louisa May Alcott, overwhelmed with grief over her dear Marmee’s death and burdened with her own poor health and responsibilities at home, gave up what would be her last chance to go to Europe.  Instead, she and the sculptor Daniel Chester French sent a young Concord orphan, Frank Edwin Elwell to Paris to embark on training at the Ecole des Beaux Arts. I was curious to understand both the relationship between Louisa and Frank (who is frequently erroneously alluded to as her adopted son) and his artistic legacy. I went to the Thomas J. Watson Library at the Metropolitan Museum of Art, where Elwell was the Curator of Ancient and Modern Statuary in 1902 -1905. There, I was pleased to find that the picture that emerged of Frank Elwell, one of dogged determination, American optimism, and lifelong heartfelt gratitude seemed to reveal a real-life Alcott boy.

Louisa’s devotion to orphan boys is one of her endearing traits, and Frank Elwell was the object of much sympathy in the town of Concord. He was orphaned at age four and raised by his grandfather, the town blacksmith and friend of Henry Thoreau. Frank and Thoreau spent much time together in the woods and Henry’s ingenuity and self-reliance may have rubbed off on the boy: he became known in town not only as an aspiring artist but as a clever inventor. One biographer states that Louisa “became a veritable foster-mother to the boy. Her love and guidance were, next to that of the grandfather, the most beneficent influence…” Another claims that “Many traits of his character can be traced to the influence of this noble, helpful woman.” May Alcott, Louisa’s artistic sister extended her interest and concern to the boy as well, giving him art lessons.

Louisa honored Frank with a portrait in “Jack and Jill”. He is Ralph Evans, “a youth of nineteen… a great favorite… a good, industrious fellow…full of talent, fun and ingenuity…valued for his mechanical skill, as well as for his energy and integrity.” Toward the end of the novel, Ralph is about to be sent off to Rome to be an assistant to the artist “David German,” Louisa’s veiled reference to Daniel French.

Elwell lived up to all the promise and talent that Louisa saw in him. He produced the first statue ever erected in Europe by an American-born sculptor, “The Death of Strength” in Edam, The Netherlands.

I like to think that Louisa’s particular American vernacular helped to inspire Elwell to remain true to his roots. One of his statues, “The Dispatch-Rider”, in South Orange NJ resembles the acclaimed “Minute Man” of his mentor Daniel Chester French in its realistic colonial garb and the determined stride of the young, hopeful man.

One of my favorite works is a small, beguiling statue of a Pompeian water boy, hidden in the “stacks” in the Metropolitan Museum.  This work is all the more poignant because it shows the innocent serenity of the boy before the annihilation of his world.

Elwell was also curiously linked to one of Louisa’s great heroes, Charles Dickens. His statue of “Dickens and Little Nell” which stands in Clark Park in Philadelphia, was the only likeness of Dickens in the world for over 100 years. Unknown to Elwell, Charles Dickens’ will expressly stated “on no account to make me the subject of any monument.” His children guarded this request precisely, but his son did state that  Elwell’s work was “ the best portrait ever made of my father.”  Not until 2014 was a second Dickens statue erected in his hometown of Portsmouth, the proud townsmen stating that Mr. Dickens could not have imagined that his legacy would remain for over 200 years. Since then, another statue which was temporarily erected in New South Wales, vandalized and lost for over 40 years was recently restored.

Elwell may have had the same sense of justice and disgust of shams that Louisa had. There is a curious incident which resulted in the end of his employment as Curator of Sculpture at the Metropolitan Museum.  Though it is impossible to sort blame or intent at this late date, Elwell quarreled with the Acting Director of the Museum over placement of and removal of some sculptures, which he had not authorized.  The director countered Elwell with “I am in command here!” to which Elwell replied “You are an impertinent rascal.” Apparently even in the early twentieth century that was enough to be terminated and escorted out of the building by police.

I feel that Elwell really displayed his best strength in the vigor of his portraits. He has two busts in the collection of the Vice Presidents in the US Senate.  Best of all, his bust of Louisa, at the University of Kansas (a copy is in the Concord Library) was pronounced the most accurate likeness of her by her lifelong friend F. B. Sanborn.

Elwell himself said of the work “Miss Alcott was so much my friend and had so much to do in forming my character that I would have been most ungrateful had I not sought to honor her memory.”  Speaking of her influence, he also said “Until her death, Miss Alcott and I were friends who understood each other.” Frank Edwin Elwell was also there to “honor her memory” at Louisa’s funeral, when, along with her beloved nephews he served as pall-bearer.

Frank Elwell’s son, Alcott Farrar Elwell, was the real-life godson of Louisa. Whether the curtain ever rises on his story depends upon the reception given to the first act of this Elwell drama. (To paraphrase Louisa)