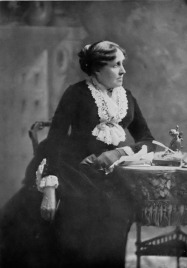 Louisa May Alcott hated being famous. Or so she said. Stories abounded of how she often masqueraded as a maid before answering the door at Orchard House to discourage would-be fans. She knew that readers imagined her looking like the dashing young Jo with her two tails of chestnut hair flying behind her when in fact, she was old, frail and sickly.

Louisa guarded her privacy jealously and didn’t appreciate the attention of her fans. Still, the fame she had acquired had its benefits, allowing her to meet many of the most prominent writers and reformers of her day.

The object of Louisa’s hero worship 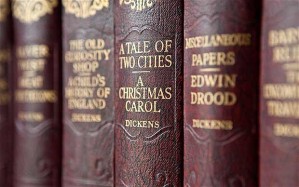 She may have abhorred hero worship but that didn’t stop her from indulging in it herself with her favorite author, Charles Dickens.

Having gratified myself in hero worship through this blog (and having acted on it with numerous visits to Orchard House), I had to smile when I read of “A Dickens Day,” a piece Louisa wrote which became a part of Shawl-Straps, a memoir of her time in Europe.

Here Louisa details her sight-seeing trips around London to places immortalized in the books of Charles Dickens.

Madeleine Stern in Louisa May Alcott A Biography writes of Louisa seeing the street where Sairey Gamp had lived. Sairey Gamp was one of Louisa’s favorite characters and she often assumed the role to bring humor into difficult situations. Sairey Gamp was in constant demand at the Union Hotel Hospital where Louisa served as a Civil War nurse.

“The genial Mr. Tyler [Louisa’s guide in the city] was delighted to find that to Louisa St. Paul’s was the place where Ralph Nickleby set his watch, and Westminster Abbey the home of the maid of honor in Mrs. Jarley’s waxworks.” (pg. 158, Louisa May Alcott A Biography)

Louisa filled her notebooks with such references to Dickens which she later turned into “A Dickens Day.”

I have to admit I know little of Dickens so I didn’t recognize most the references Stern made to Dickens characters and sites. But as a fellow hero worshipper, I can surely empathize with the feelings Louisa must have had visiting those places. She went on her pilgrimage just as we have.

Watch what you wish for!

Louisa had the one privilege I and other Alcott enthusiasts will never have – meeting the author in person. Perhaps we should count ourselves lucky! Louisa was less than enthusiastic seeing Dickens in person. Stern writes,

“… the magic was gone, and in its place was only the foppishness of a red-faced man with false teeth and the voice of a worn-out  actor … there was nothing genuine about him.” (pg. 157, Louisa May Alcott A Biography)

Louisa was deeply disappointed and, as much as she still loved his books, she would never be able to shake the image of the man.

Respect for her fans?

Perhaps that’s why she herself was so sensitive about the perception her fans had of her. Why dash the image of Jo March, replacing it with a curmudgeon, sick and frail? Let the fans have their dream.

Louisa was probably too hard on herself but as much as she claimed to dislike her fans, she apparently respected them. And she knew who paid the bills!

5 Replies to “Louisa the rabid fan”