In honor of Mother’s Day, I am delighted to present this guest post by Barbara Solomon Josselsohn,  reprinted with permission from NYMetroParents.

A two-day trip to Concord, Massachusetts and the home of Louisa May Alcott, author of Little Women, is a great way to commemorate Mother’s Day—or any other time set aside just for the girls. Explore this weekend getaway and experience unforgettable memories, Little Women style. 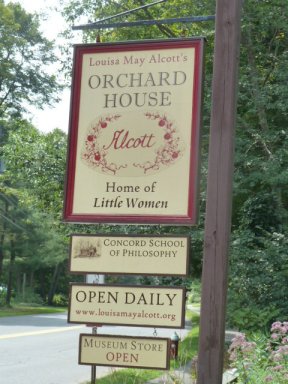 To me, Louisa May Alcott is the quintessential feminist, a working woman who earned enough from writing to pay the bills, support her impractical father, and have a bit left over to vacation in Europe, where she reportedly enjoyed the company of a dashing younger man. To my teenage daughter, she’s an exquisite role model, a talented writer compelled to give life to the scores of beguiling characters dancing around in her head.

So when the opportunity arose for Rachel, then 15, and me to steal away for a weekend last summer, we could think of no better place than Concord, home to our favorite storyteller.

We left Westchester on Saturday morning, and after stopping for lunch on the way, arrived in Concord in the early afternoon. A long, shady road led us directly to Orchard House, home to the Alcotts between 1858 and 1877 and the place where 36-year-old Louisa would write her classic novel, Little Women. The structure of the house is unchanged since the mid-19th century and the majority of furnishings once belonged to the family, so the feeling of authenticity is palpable. As we learned from our guide, the Alcotts were a tight-knit, accomplished group: Dad was a visionary, Mom was a social-justice advocate, oldest daughter Anna (Meg in Little Women) was an actress, and youngest daughter May (Amy) was an acclaimed artist whose paintings adorn the house. (A fourth sister, Elizabeth, died young, as did her namesake in the book, Beth.)

Of course, the best part was exploring Louisa’s bedroom and examining the half-moon shaped desk, nestled against a wall and between two windows, which her father built for her and where she would write her masterpiece. We learned lots of charming personal nuggets, such as the fact that Louisa had what she called a “mood pillow”—a small bolster that she’d position in one way or another to let her family know her temperament at any given moment. My daughter loved this idea so much that she bought a replica in the gift shop, to inform us of her changing moods.

Our guide said not to miss the historic and nearby Sleepy Hollow Cemetery, where the Alcotts are buried. So after a quick stop in the center of Concord for iced tea and muffins, we were on the road again.

Within Sleepy Hollow Cemetery, we found “Author’s Ridge,” a rocky, shaded hill that serves as the final resting place for the entire Alcott clan as well as the great American writers Ralph Waldo Emerson, Henry David Thoreau, and Nathanial Hawthorne. It was here that we thought about the Alcott family’s later life, which was not entirely happy. Specifically, Louisa’s sister Anna was widowed as a young mother, and her sister May died soon after giving birth to a daughter. (Louisa would go on to raise the little girl as her own.) Louisa, who never married, suffered from chronic health problems, and died at age 56. It’s nice to think that she is buried close to her parents and surrounded by her sisters, the core of her life and the inspiration for so much of her creative output.

We stayed in Boston that night, thinking that we could use a little action after so much quiet and contemplation, and we chose a hotel right on the harbor and steps away from Faneuil Hall and Quincy Market. Taking full advantage of this location, we had a tasty seafood dinner alfresco and then strolled the area, enjoying the street performers, shops, and summer breeze coming off the water. 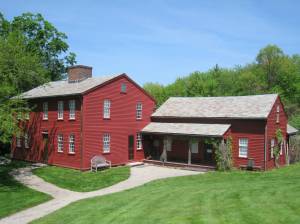 The next morning we headed to the Fruitlands Museum in Harvard (45 minutes from Boston) to explore one of the lesser-known chapters in Louisa’s life. It seems that her father, like his friends Emerson and Thoreau, was a member of the Transcendentalist movement, which held that connecting with nature was the key to spiritual enlightenment. Partnering with like-minded philosophers, Alcott moved his family to a farmhouse, now the Fruitlands Museum, when Louisa was 10, in an effort to withdraw from society and live only on what they could grow. The problem was, the group knew nothing about farming, and Alcott’s retreat lasted a mere seven months.

Though Alcott left Fruitlands disillusioned and disappointed, his effort was not a total failure, as it inspired Louisa years later to write Transcendental Wild Oats, a deliciously funny, largely autobiographical account of her family’s ill-fated experience.

Today, Fruitlands is home to the restored farmhouse and museum, as well as to Fruitlands Café, a magnificent open-air eatery. Its canopied patio sits atop an enormous hill with a spectacular view of the Noasha Valley, and the altitude creates a lovely breeze even on the warmest summer day. Rachel and I enjoyed a lunch of fresh salads and homemade ice cream for dessert. More important, we had the chance to savor a relaxed, uninterrupted mother-daughter conversation—something we don’t get to do often enough, thanks to the rush of everyday life.

After lunch we stopped at the gift shop and spent way too much on a stack of Louisa’s lesser-known books—yes, they’d be cheaper on Amazon.com, but it felt more special to buy them here. Then it was back to Boston. We dropped in on the New England Aquarium for a quick visit because it was so close to our hotel, and then enjoyed the warm late-afternoon sun on a bench near the harbor, sipping iced Starbucks drinks and picking out which books we each wanted to read first.

We left Boston early Monday morning, and were soon back to our everyday routines. My only regret about the weekend is that it went by so fast—and I truly hope we’ll do it all again one day soon.

An Alcott Adventure: Mark these important places on your itinerary:

Barbara Solomon Josselsohn is a freelance writer based in Scarsdale, NY  and the mother of three children. You can read her blog, Just Another Working Writer

4 Replies to “For Moms and their ‘Little Women’”