NOTE: I was unable to attend this year’s Summer Conversational Series at Orchard House from July 14-18 so I asked participants to act as correspondents for the days they attended.  Here is a very complete and wonderful summation of Tuesday’s talks by Lorraine Tosiello.

The theme of this year’s conversation was Good Wives: Marriage and Family in Little Women Part Second and Beyond, and our presenters really took us “beyond” today!

Lisa Elwood, “The Vocational Novel: A Woman’s Writer’s Aspirations beyond the Domestic Sphere” 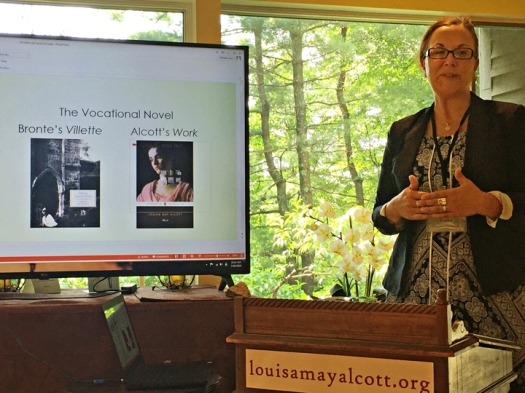 Lisa Elwood invited us to consider a part of her PH.D. Dissertation topic, “The Vocational Novel: A Woman’s Writer’s Aspirations beyond the Domestic Sphere” and used Alcott’s novel Work and Bronte’s novel Villette as examples. She delineated how Alcott and Bronte wrote of the desire of women to have Aspirational careers or “vocations” which she defined as something that leads from a person’s core, an inspirational passion that is separate from religion. The writers dare their readers to imagine themselves as independent, self motivated and spiritually sanctioned participants in the world. Likewise, work can foster the development of one’s natural talents and the assertion of individual genius.

Alcott and Bronte were both children of commited moralistic men with eccentric ideas about child rearing, grew up in a rebellious time and atmosphere, took on masculine pseudonyms, and became the family breadwinner, taking on the burden of duty for their parents and siblings. No other theme connects them so much as mutual insistence on a woman’s search for meaningful work.

Elwood was able to compare and contrast the works regarding the issues of self-motivation, education of women, independence, loneliness of women on a vocational path, economic necessities and spiritual fulfillment.

My favorite quotes from the two books: Lucy Snow in Villette says “Let us be steady, and know what we are about, and find the meaning of our magnificence.” And Christie, well, she talks a bit more directly, “Leave something behind besides ashes.”

The second conversation of the morning was called “Family and Domestic Legal Norms in Alcott’s Youth.” Professor Richard Chused of New York Law School, who gave a fascinating (and hair raising!) discussion of the marriage and property laws that existed during Louisa Alcott’s lifetime and how they may have impacted on her welfare as a child and on her driving desire to acquire wealth to pay her family’s debts.

Alcott’s mother Abigail was in financial straits most of her life, as her husband failed to earn a living, leaving the family in debt. Married women could not own any personal property– not cash nor moveable objects, securities nor land–their husbands quickly obtained ownership of all that belonged to the wife when she was a single woman. Abigail had some wealth passed to her from her Grandfather, who had wisely made a trust provision that it was for her “sole and separate use,” which protected it from Bronson’s creditors. She used it to buy the first family home in Concord. Later, when the family sold the home to the Hawthornes, the money became Bronson Alcott’s possession!

Child custody rules favored the father as well. Professor Chused noted that when Abigail announced to Bronson that she was leaving Fruitlands and taking the children with her, that she was directly opposing the legal statutes of the day: a woman was supposed to follow her husband in all things. Bronson’s wife and daughters likely knew that his progressive ideas and love for his family would keep them together.

Laws began to change as Louisa reached adolescence. In 1848, the Women’s Rights Convention in Seneca Falls was followed by a National Women’s Convention in Worcester in 1850 calling for legal reforms to address women’s right to vote and changes in family. Still, Louisa would have been faced with oppressive financial and contractual restrictions if she had been a married woman. It was not until 1855 that Massachusetts led the way with the Married Women’s Act, which allowed married women to maintain the property they took into the marriage, make a will, carry on a business, and, importantly in Alcott’s case, hold a copyright!

Finally, we were treated to a virtual presentation from Kari Miller, whose PhD dissertation was about the forgotten author Jane Godwin Austen. She focused on the story of Dora Darling, daughter of the Regiment in her talk entitled “Little Vivandieres: Reimagining a Girl’s Role in Love and War.”

Jane Godwin Austen wrote 24 books. In 1860 she moved to Concord as a young wife and mother and seems to have befriended Louisa Alcott. The two young writers probably traded thoughts about writing when they met at the Mill Brook. Austin dedicated her book Cipher, A Romance to Louisa. The dedication, which is really charming is depicted in the photograph. We all wondered who the boys on the opposite bank might be!

Austen’s Dora is a plucky heroine who fills the role of the Vivandiere of a Union regiment, basically a female water boy,a small nurse and overall cheerleader to the soldiers. Austen creates a character who is the first female protagonist In the civil war. Dora faces a lot of risks and danger, and interacts directly in the war, creating a real adventure. Dora resists authoritarian rules, and teaches the men more than she learns from them, admitting that while they can explain things to her, she maintains her own control of her thoughts and beliefs. Even though she is an adventurous being, Dora’s piety, bravery and innocence are what wins over the men.

Austen and Alcott lost contact after 1870 when the Austin family left Concord. Austen’s fiction became more conventional, after that. We were thrilled to know that Louisa and Concord probably influenced this early work. And that two lady writers threw chip boats into the current together!

For those who have not attended the Summer Series, put it on your bucket list. The embracing welcome from Jan Turnquist and Lis Adams and their staff is a treat that everyone should give themselves.