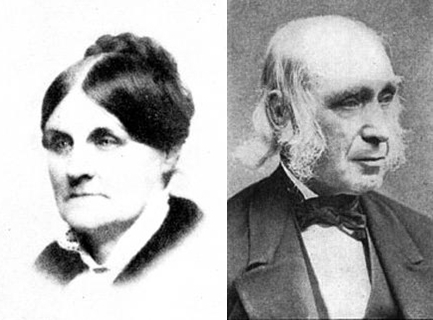 I am pleased to announce that we will be doing a book discussion in the coming weeks on Marmee and Louisa: The Untold Story of Louisa May Alcott and her Mother by Eve LaPlante. Each Thursday I will do a post on one chapter of the book, giving a brief reflection and offering discussion questions.

As a warm-up, I thought I would offer a post on how Abba and Bronson met, and how they fell in love and were married.

Looking forward to our future discussions!

It was because of the Reverend Samuel Joseph May that his sister Abigail (“Abba”) would meet Amos Bronson Alcott in 1827. Reverend May was living in Brooklyn, CT during the late 1820’s and had taken on the cause of improving Connecticut’s poor public schools. In 1827, Bronson was teaching in Cheshire, seventy miles south of Brooklyn, and had become known as an innovator in education; much interested, Reverend May invited Alcott to his home. When Bronson knocked on the parsonage door, he was greeted by the minister’s younger sister, Abigail.[1]

Abba at twenty-six had been resisting the idea of marriage, preferring instead to open a school. Her family had arranged for her to marry her cousin Samuel Frothingham but he died before they could be wed.[2] Now entering spinsterhood, she found herself quite taken with the tall blond stranger at the door with the piercing blue eyes and lilting voice who spoke of things dear to her heart. It would be this mutual interest in education reform that would draw the two together.

Although there was a strong attraction, the courtship moved along slowly. Abba and Bronson sustained their three-year courtship through long letters. While Bronson could express warmth and emotion in his writings, he had great difficulty in doing so face to face. Thus it was that when he met and fell in love with his future wife, he could express his affection for her only through the written word. He would eventually declare his love by allowing her to read his journal.

In temperament and approach to life, Abba was the polar opposite of Bronson. She wrote, “He is moderate. I am impetuous. He is prudent and humble. I am forward and arbitrary. He is poor. But we are both industrious.” [3] While he dwelt on the ideal, the theoretical and the abstract all in an effort to achieve the perfection of heaven on earth, she was grounded in worldly affairs, mostly concerned with the details of everyday life. He would come to believe that family was his salvation although he was often an absent father physically and emotionally; she never stopped being a devoted mother, pouring herself into their four daughters. 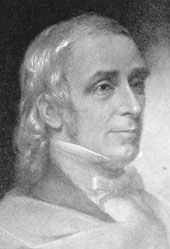 Both were passionate, courageous and spiritual, losing themselves in righteous ideas and causes. But while his driving force was intellectual, hers was emotional. Bronson, a reserved and introspective man, was initially attracted to Abba’s openness, passion and spontaneity. He would, however, come to find her emotional force to be overwhelming, once comparing that force to a “hurricane.”[4]

Alcott family biographer Madelon Bedell wrote that Bronson could not cope with the extremes of Abba’s feelings because he was accustomed to objectifying his own emotions, moving them from painful reality into the safety of impersonal philosophy. He once lamented that he speculated on sorrow when he ought to be relieving it.[5] Abba’s letters demonstrated her frequent use of dramatic and overwrought language in describing day-to-day happenings. This sometimes excessive emotionalism caused Bronson to be critical of his wife even as she deserved consolation and sympathy. He chided her propensity to throw herself into her duties with excessive enthusiasm only to wear out her strength and sink into despondency.[6]

Opposites do attract however, and the two would marry at King’s Chapel on May 23, 1830; they were both twenty-nine years of age.

It was a marriage of choice out of mutual love and respect. Their powerful intellectual connection would sustain them even as their temperamental differences would nearly drive the two apart. Although reserved emotionally, Bronson was a sexually passionate man; the conjugal relationship he and Abba enjoyed would prove to be essential in renewing and maintaining their marriage. Though their lives together would prove difficult, even tumultuous at times; though they would endure rejection, ridicule and chronic poverty, Bronson and Abba would remain committed to one another in marriage for forty-seven years before her death in 1877. Their four remarkable daughters, whom Bronson dubbed “The Golden Band” and who would be immortalized as the March sisters, were the product of their union.[7]

[1] LaPlante, Eve, Marmee and Louisa: The Story of Louisa May Alcott and her Mother, pg. 27

3 Replies to “What attracted Abigail May to Bronson Alcott? Beginning a book club discussion of “Marmee and Louisa” by Eve LaPlante”