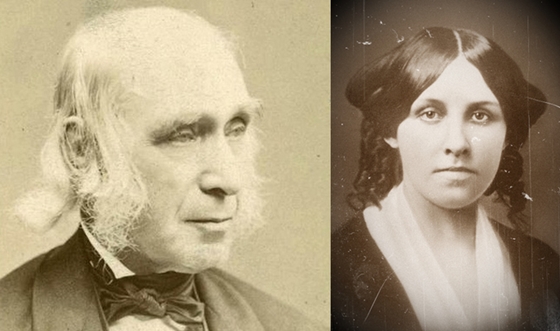 Note: I originally posted this 2 years ago and thought it worthwhile to mention these things again.

Louisa May Alcott had remarked in her journal that memories of her November 29th birthday were not always happy ones.

The gift of self-denial

There’s the famous story of birthday number 3, celebrated at her father’s Temple School where, in the end, she had to deny herself her own birthday treat and give it to a student because there were not enough. Her “gift” was praise and a kiss from her mother for her self-denial. Bitter sweet.

Letter from her father

Then there is this story which I recently discovered in my re-read of Madelon Bedell’s The Alcotts: Biography of a Family. On her tenth birthday, she received this letter from her father:

“The good Spirit comes into the Breasts of the meek and loveful to abide long; anger, discontent, impatience, evil appetites, greedy wants, complainings, ill-speakings, idelnesses, heedlessness, rude behavior, and all such as these drive it away, o grieve it so that it leaves the poor misguided soul to live in its own obstainate, perverse, proud, discomfort; which is the very Pain of Sin and is in the Bible called the worm that never dies, the gnawing worm, the sting of Conscience.” (The Alcotts Biography of a Family, pg. 244)

Bedell maintains that Bronson and Louisa may have been uncomfortable with the implied intimacy of sharing the same birthday, given their tempestuous relationship. In an effort to downplay the meaning, Bronson made sure every member of the family got a gift on their respective 43rd and 10th birthdays: Abba received a new rocking chair, Anna a silver pencil case and gold pen and inkstand, Lizzie two books. The birthday girl received the same gift as her baby sister Abbie: “little stories,” hers being titled “Flora’s Dial.” (Ibid) So only did every family get a gift on their birthdays, but some members got better gifts. How it must have stung Louisa’s heart to see the obvious favoritism Bronson showed towards her older sister (and where the money came from for such extravagance is a mystery).

Yet, over the years, Louisa and Bronson came to appreciate one another as one matured and the other mellowed out. Her sacrifice of health during her Civil War nursing stint showed Bronson that his daughter was of extraordinary character. He was proud of her, and that pride continued through her literary success. It is said that he lived off of Louisa’s success in his subsequent conversation tours but could he have not also just been a proud father?

In the end they would share the closest of intimacies, dying within three days of each other, he inviting her to come “up” with him, pointing heavenward.

2 Replies to “Happy birthday! The gifts that keep on giving: Bronson Alcott at 218, Louisa at 185”