I have had a secret longing to read young adult books because they read quickly. With all the heavy reading I’ve had to do lately, it’s nice to just fly through a book without taking notes or analyzing each paragraph. Yet, I always felt I should not be reading such books since I am an adult. After hearing Cathlin Davis’ stirring defense of the value of children’s literature at the Summer Conversational Series (see previous post) I confessed to the group that I felt like I had received permission to read children’s literature!

I had already started reading The Mother-Daughter Book Club by Heather Vogel Frederick and this made the reading even more fun.

About the author and the premise of the book

The Mother-Daughter Book Club (first in a series) focuses on four mothers and their pre-teen daughters living in Concord, MA and reading Little Women. The project was suggested to the author as she herself lived in Concord for seven years, right down the street from Orchard House. In the notes following the story she writes that she rode her bike past the home, dreaming of becoming a writer. She likens herself to Louisa in her love of exploring nature, reading books and writing stories.

The main characters mirror in part the March sisters: Emma is the wanna-be writer and bookworm, Jess is the gentle and shy animal lover, Megan is the vain and spoiled aspiring fashion designer and Cassidy is the rambunctious tomboy and athlete who plays hockey. It appears that Meg is the only March sister not represented by this group.

Frederick uses an interesting method in laying out the story, devoting chapters to each girl, using their unique point of view to describe what is happening. While it gets a bit confusing trying to remember whose mom is whose, it’s a wonderful way to get inside the head and heart of each character.

The Mother-Daughter Book Club covers the sixth grade year of the girls with all the familiar drama of middle school. I found myself reminiscing about life in the sixth grade as I read about the Fab Four (the cool kids who terrorize everyone – Megan is a part of this crowd), crushes on boys, the obsession with clothes, and sticking out for being “different.” It reminded me of just how complicated it was to be twelve years old.

Each daughter has a dilemma:

The mothers have their stories too: 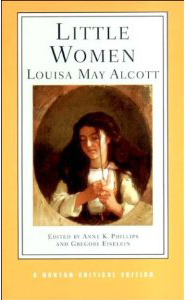 This then is the set-up for the four arcs of the story. They are well-developed, funny and sometimes rather poignant. There are the stereotypical minor character “bad girls” (Becca, one of the Fab Four and her obnoxious mother Calliope) and of course the book club meetings where there are many references to Louisa May Alcott and Little Women. Frederick also uses many references to Concord right down to street names, Sleepy Hollow cemetery and the recreation of the first battle of the Revolutionary War at the Old North Bridge. Being so familiar with Concord, it was fun imagining the scenes.

I enjoyed being a witness to the response of today’s pre-teens to Little Women. I also appreciated that the girls, although similar to the March sisters, had their own very distinct personalities and stories.

While the book does wrap up all the loose ends and everyone lives happily ever after, the solutions are, for the most part, believable because of the care Frederick takes in working out each dilemma.

I very much enjoyed The Mother-Daughter Book Club; it read so fast that it was hard to put down; I was sorry to see it end. I enjoyed reliving my own memories of being twelve and identified with each character.

So Cathlin Davis was right: there is no shame in reading children’s literature. I will have to do it more often as it gives me a chance to “get away from it all.” Is it a guilty pleasure? A pleasure, to be sure, especially with books like The Mother-Daughter Book Club.