You never know what a house can tell you! No matter how many times I visit Orchard House, I always learn something new.

Last Friday I had the privilege of meeting longtime email friends from Paris, France. Charline Bourdin, the author of the first French biography of Louisa May Alcott and the webmaster of a French Louisa May Alcott blog is visiting the United States for the first time. Accompanied by her friend Pierre (who is fluent in English), their purpose was to make a pilgrimage to various Alcott-related sites. First stop: Louisa May Alcott’s Orchard House.

Our tour guide was an elderly woman with a deep knowledge of the family. For example, I learned that Lizzie’s melodeon in the dining room was the one given to her at age 20 by Dr. Henry Whitney Bellows when the family was living in Walpole, NH. Harriet Reisen had mentioned this story in Louisa May Alcott The Woman Behind Little Women and I always wondered if the instrument survived. Eve LaPlante’s book, Marmee & Louisa: The Untold Story of Louisa May Alcott and Her Mother had mentioned the acquisition of a seraphine which is similar in appearance to a melodeon (see previous post). It gave me a special thrill to know that I could see the melodeon that inspired the story of Mr. Laurence’s gift of a piano to Beth. It’s one of my favorite parts of Little Women. 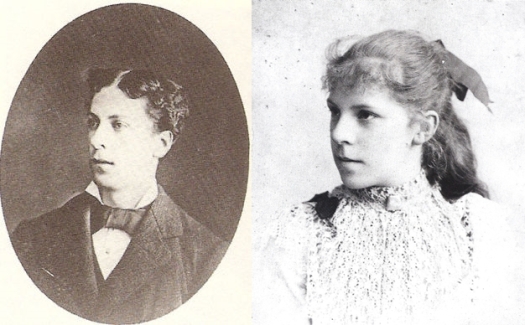 Did you know that descendants of Lulu Nieriker are still in touch with Anna Alcott Pratt’s descendants? Reisen had mentioned some trouble between the families because May’s husband Ernst had wanted a larger piece of Louisa’s inheritance. Lulu mentioned in an interview with Madelon Bedell (see The Alcotts: Biography of a Family) that she felt closest to Anna so undoubtedly it was her efforts that maintained the connection.

Direct connection to May Alcott Nieriker

Jan Turnquist, Executive Director of Louisa May Alcott’s Orchard House met us at the end of the tour, eager to meet the French couple who had traveled so far to tour the house. Jan has established an International Circle of Little Women fans and was delighted to know that Charline and Pierre came from Meudon, a town just outside of Paris where May lived and studied art, eventually getting one of her paintings into the prestigious Paris Salon.

An Orchard House tour guide, Karen Goodno, had a chance to visit Meudon in search of May’s residence and we got to see her photos. She believes she found the house where May and Ernst lived. Charline and Pierre knew the area well and were very excited.

Jan was thrilled at the offer from Charline and Pierre to begin forging a relationship between Orchard House and the town of Meudon not unlike the sister city relationship Orchard House already enjoys with Nanae Town in Japan. They will stay in contact and work on this.

After a lively conversation Jan gave us the “wonk” tour. See if you knew these interesting facts (and no fair if you worked at Orchard House!):

The tour was dreamy and I was on air, never expecting so many delights. Charline taught me a very important lesson that day: it’s okay to ask! Most likely the answer will be “yes!”

We were then off to Fruitlands for a lovely lunch at the Café and a tour of the Fruitlands house. More on that in the next post.

Where is Anna Alcott Pratt’s grave?

Charline posed an interesting question over lunch: Is Anna buried in the Alcott family plot or is she buried in the Pratt plot? Both are at Sleepy Hollow. She couldn’t find the stone and I can’t remember. Comment if you know the answer.

I miss my dear French friend already! I hope we can see each other again soon.

8 Replies to “A visit with fans from abroad gets us the “wonk” tour: Did you know these tidbits about Orchard House?”

The first draft of chapter 3 of my Lizzie Alcott biography is ready for editing! A particularly difficult chapter to write, I share tools that helped me through the process. #lizziealcott #amwriting #biography
Looked what landed on my doorstep today! Thrilled to be a part of this first-ever academic study of May Alcott Nieriker. My thanks to Routledge, Azelina Flint and Lauren Hehmeyer. Click on my profile for more info. #theforgottenalcott #mayalcottnieriker #amymarch #Routledgebooks #taylorandfrancis
Imagine reading handwritten letters form the March Sisters. How would that change the way you read "Little Women?" Book review: "Letters From “Little Women” Craft Intimacy Between Reader and Alcott’s Beloved Characters" (from BookTrib) @booktrib #littlewomen #bookreview