As mentioned in a previous post about the art of domesticity, I have been reading Little Men, or Life at Plumfield with Jo’s Boys. The audio book version from Librivox.org has actually been my companion while doing yard work and gardening these past few Saturdays. Keeps my mind off of my aching joints and bones! Listening to Little Men as opposed to reading it has given me a chance to take a step backward and see the story as a stand-alone work.

I’ve had problems reading Little Men in the past because I had assumed it would be an extension of Little Women. Instead, it concentrates more on the boys and girls of Plumfield rather than Jo and Professor Bhaer (and after twelve chapters, I’ve seen little or no reference to the other main characters of Little Women with exception of Laurie). It reminds me of the experience of reading The Lord of the Rings trilogy by J. R. R. Tolkein. The magic of the story was lost for me after the first installment, The Fellowship of the Ring, because the Fellowship split up and went in different directions. It was the chemistry of the Fellowship that made the story special for me, just as the sisterhood of Meg, Jo, Beth and Amy made Little Women special.

A direction not taken

Some distance from Little Women has helped me to better appreciate the charm of Little Men although it did leave me wondering why Louisa chose to go this way with her sequel. Obviously the sisters are grown women now with their own lives but I would have thought she would have placated her fans with more about the sisters. Louisa was indeed a professional writer with a keen understanding of what sells, but she was independent too.

Why the book was written

Little Men was written as the result of the sudden death of Anna’s husband John Pratt. Louisa and May were in Europe at the time, taking the Grand Tour. When Louisa heard the news she immediately sat down to write Little Men so as to support her nephews, Freddy and Johnny, with its sales. It would follow then that the book would be written more with them in mind.

Much taken from real life

Like Little Women, Little Men is full of real life anecdotes, and in some ways, they are more obvious. For those of you with a thorough knowledge of Louisa’s life, these anecdotes jump right off the page. Yesterday while listening to chapters 6-12, I picked up on several which I’ll share in upcoming posts.

Her father Bronson is very much present in the good and kind Professor Bhaer as well as in Grandpa March. In Chapter 3, “Sunday,” I could hear Bronson speaking clearly through the voice of Demi, Meg’s son.

Nat is the new boy, having only been at Plumfield a day or two when  chapter 3, “Sunday,” opens. At bedtime he notices a picture on the wall at the foot of his bed which he found  “peculiar … for it had a graceful frame of moss and cones about it, and on a little bracket underneath stood a vase of wild flowers freshly gathered from the spring woods. It was the most beautiful picture of them all …” Nat found himself longing to know more about the picture and Demi noticed. He began then to tell the story of Christ, The Good Man, as told to him by Grandpa March.

In the picture, Christ is blessing the children and Nat, who knows little about Him (except for His name being taken in vain), remarks how kind Christ looks. Grandpa March had given the picture to Demi after telling him the story of The Good Man many times. Demi related to Nat that Christ loved poor people, “and was very good to them. He made them well, and helped them, and told rich people they must not be cross to them, and they loved Him dearly, dearly.” 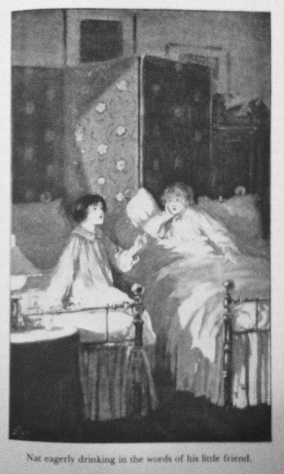 He continued to tell Nat about the life of Christ and how the “bad men killed Him.” Nat, only at the school for few days, took great comfort in the story; Jo, so grateful to her nephew for offering such comfort to Nat, thought to herself, “Demi is unconsciously helping the poor boy better than I can …”

There are references in Anna’s childhood diaries of conversations with her father on biblical stories: On Wednesday, September 2, 1839 she wrote, “I had a very interesting talk with father about Jesus. He explained to me some things that I wanted to know about what he did: about his feeding of the five thousand people, and about raising the dead to life, and stilling the tempest. I like conversations with father.” (from Houghton Library, Amos B Alcott Family Letters 1837 TO 1852 Vol. 1 to Vol. V 1852-1855).

In another passage, Anna shows her preferences for her father’s way of teaching religion: Sunday, December 22, 1839 “I went to Mr. Barnard[‘s church] this morning. I wish he would preach about something that I could understand as father does when he talks with me about being good. After I came home, father read about God’s making the World, about Adam and Eve in the Garden of Eden, eating the forbidden fruit, and being sent out of the garden, and about Cain’s slaying his brother Abel. Father explained it to me so that I might understand it. He wishes me to understand all I read. He talked with us about loving one another.” (Ibid)

For all of Bronson’s faults, his way of making religion a living faith for his children is to be commended.

It’s obvious through Demi’s story of the Good Man and its impact on Nat, that Louisa was greatly impacted too. The voice of her father through Demi was tender way that he told it to Nat, who needed that kind of consolation.

It’s these kinds of stories that makes Little Men special to me.