With regards to our discussion of Eight Cousins, a reader asked some questions about fashion in reference to chapter 5, “A Belt and a Box.”

The question was, “Do you know of any information about what Louisa and her mother taught about fashionable clothing? Do you know if she was reading doctors or feminists who were revealing the deleterious nature of fashion?” (thanks to Sarah).

Did Louisa read up on fashion? Apparently …

I belong to the Louisa May Alcott Society and posted the question to members. Melissa M. Pennell, Ph.D., professor of English at UMass Lowell responded with the following:

“There was lots being discussed about women and dress reform in New England – you might like to consult some of the writing done by Mary Livermore and Elizabeth Stuart Phelps*, as well as Amelia Bloomer. LMA and her mother were certainly aware of the work of these writers.  There are also a number of items that appear in the “medical” and advice literature of the time.”

I haven’t had the opportunity to look up the opinions of these writers on fashion, perhaps some of you have. I’d love to hear your thoughts.

*Elizabeth Stuart Phelps was an author, writing for children as well as adults. I found this line from an online biography rather interesting (bold emphasis is mine):

“Phelps also wrote the four-volume Gypsy Brenton series, her best-known juvenile work. One commentary notes that Gypsy, a more tomboyish figure than the characters in the Tiny series, “set the pattern for the engaging tomboy heroine [later popularized by Alcott’s Little Women, Susan Coolidge’s What Katy Did, and subsequent characters such as Carol Ryrie Brink’s Caddie Woodlawn and Wilder’s Laura Ingalls] and demonstrated the popularity of the tomboy’s story.” (click here to read the entire bio).

Here are a couple of the books: 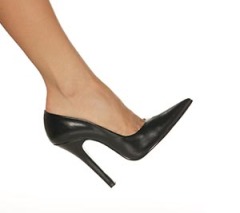 Sarah, the poser of the question, posted something on her blog,  Frigate to Utopia, developing the comment she made earlier about the role of Seventh Day Adventist Ellen White. There are wonderful pictures and descriptions of fashions of the time, I highly recommend you read this post! Talk about suffering for beauty – strikes me as rather sadistic on the part of men (and masochistic for women) to adhere to these fashion trends. The corset was pretty dangerous but I wonder – is the 5″ heel any less dangerous?

On another fashion tangent, one of my favorite blogs, the Two Nerdy History Girls blog, ran a post about a hidden danger that rose up due to the mass-production of clothing. Here’s a teaser:

By the middle of the 19th c., more and more clothing was being mass-produced rather than individually hand-sewn for the wearer, with technological advances such as sewing machines and high-speed textile looms bringing the industrial revolution to fashion . . . In 1856, an eighteen-year-old chemistry student named William Henry Perkin (1838-1907) accidentally created the first aniline dye, a vivid purple dubbed mauveine, and from this sprang a whole spectrum of colors . . . There was only one catch: that lovely, brilliant shade of Perkin green (one of the most popular of the new colors) contained arsenic . . .