The 1930s was an interesting time in Alcott scholarship. The year 1932 marked the one hundredth year of Louisa’s birth. 1938 not only marked the 50th anniversary of Louisa and Bronson’s death but also the 70th anniversary of the publication of Little Women. Thus in 1937, two important biographies were released – Odell Shepherd’s Pedlar’s Progress on Bronson Alcott (see previous post) and Katharine Anthony’s Louisa May Alcott.

Reception of the biography 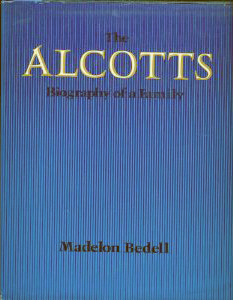 Anthony’s book was not well received. Although deemed substantive and scholarly by reviewer Frederic L. Carpenter (writing for the New England Quarterly in December of 1938), he roundly criticized her need to psychoanalyze Alcott, calling the results “unfortunate” and “ridiculous.”

That, however, was 1938. More modern biographies by Martha Saxton in 1977 and Madelon Bedell in 1980 conduct their own psychoanalysis which makes for fascinating and often, uncomfortable, reading. This was true as well with Anthony’s book.

And yet, Anthony’s book reads like a novel. It was one of the first adult books I read on Louisa (after Martha Saxton and Madeleine Stern). Knowing so much more now after years of research, Anthony’s take on Louisa affirmed much of what I had suspected and raised new controversies. I will focus on two of those controversies for this post.

“For Louisa, who wished to see everything through her mother’s eyes, this reinstatement of the dragon was devastating. Her letters and diaries of that summer show how piteously distracted was her state of mind. If her mother, having once demolished the beast, had turned the sword in his body, all would’ve been plain sailing. But she saw now that the relation between the three grown-ups was a more complicated situation than she had any idea of and it gave her the feeling of a nerve-racking dilemma.  She wrestled precociously with her mother’s contradictory character, and the struggle made her sometimes despondent and sometimes reckless. The departure of Mr. Lane brought her providential relief.” (Louisa May Alcott, pg. 54)

Carpenter in his review called this section of the book “unpleasantly ambiguous,” wondering if Anthony was suggesting some kind of secret liaison between Lane and Abba since Bronson left for New York during his stay.

For me, it was the beginning of a quiet vendetta against Abba Alcott by Katharine Anthony. With regards to the family’s need to move to Boston due to financial need, Anthony writes,

“A perverse vision had come to Mrs. Alcott while still in Concord. Both of her older daughters were earning wages. Anna was teaching away from home, and Louisa had begun to teach also, having opened a school in the barn. By a reversal of the usual process between parents and children, the girls set an example for their middle-aged mother. Mrs. Alcott, having steadily refused to see the necessity for working prior to her marriage when the necessity for it had been most apparent, now at once saw it very clearly. Just when her family needed her attention most, she decided to go forth and become a wage earner. Their finances had not become any worse, because Anna and Louisa had begun to bring a little money into the home. But Mrs. Alcott’s heroism drove her just at that point to take her spectacular plunge into a life of wage earning.” (Ibid, pg. 74)

Was Anthony’s criticism of Abba influenced by the time the author lived in? Women’s roles were still pretty much confined to the home in the 1930’s. Despite the fact that Anthony was a professor at Wellesley College along with being an accomplished author and scholar, she appeared to judge Abba by rather conventional standards. I am not aware of any other biographer taking the point of view that Abba did not need to go to work in Boston. Anthony insinuates on the next page that Abba’s efforts were not all that successful, citing no records of the reports she wrote on her work that were said to be excellent (such records now exist at the Houghton Library). She discounts the value of Abba’s intelligence office, writing that “The only domestic service job that Mrs. Alcott secured, as afar as we know, is the one she turned over to her daughter Louisa …” (Ibid, pg. 75)

Anthony’s various insights throughout Louisa May Alcott are interesting to say the least and they don’t just apply to Louisa. Anthony provides meaningful sketches of each member of the family (and in my opinion, she is one of the few to give Lizzie her due). Her analysis of Louisa is not oppressive or overbearing such as is the case with Martha Saxton (although I believe Saxton’s book has value) because she does not dwell on the amount of detail that Saxton reveals. The point, however, still gets across. 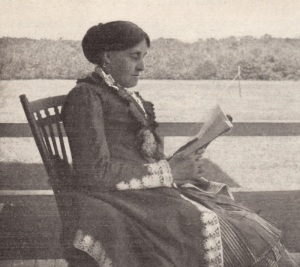 Much has been made of Louisa’s health after her service as a nurse in the Civil War. After surviving both typhoid pneumonia and the mercury poisoning from being dosed with calomel, Alcott suffered from a wide variety of physical disorders including pains in her legs, headaches, digestive disorders, vertigo, the loss of her voice, etc. Historians and medical doctors Bert Hirschhorn and Ian Greaves suggested Lupus, an immune disorder, possibly triggered by the mercury poisoning (see Harriet Reisen’s Louisa May Alcott The Woman Behind Little Women)..

Louisa kept careful track in her journals of her health problems and often blamed “nerves” and overwork for her difficulties. Considering the heavy load that she carried in being head of the family and the breadwinner, it is not surprising. In the waning years of her life, she became obsessed with her health as she could find no relief.

Katharine Anthony offers her suggestion for Louisa’s health problems: shell-shock. Citing the Great War and the mental and nervous disorders in the veterans, she surmises that Civil War veterans would have also suffered similar trauma. “It was some form of shock to which Louisa May Alcott succumbed as a hospital nurse in 1862,” she writes (Ibid, pg. 252). Such an injury to the nervous system could afflict the victim for the rest of her life. Anthony also believes Alcott was predisposed to such a condition given her high strung nature.

There is no doubt that Louisa lamented repeatedly in her journal regarding the onslaught of her life and writing (aka, overwork) on her nerves. Between sudden fame for a woman who did not feel worthy, the untimely deaths of John Pratt and May Alcott, the care of May’s daughter and their aging father, and the self-inflicted pressure to continue writing (and earning), it is no wonder Louisa May Alcott had health issues.

Louisa’s last days were painful, difficult and sad as despair overtook her. The final pages of Louisa May Alcott describe those days with a haunting eloquence as Anthony marvels at Alcott’s ability to continue churning out cheerful and meaningful stories for the young even to her dying day.

Looked what landed on my doorstep today! Thrilled to be a part of this first-ever academic study of May Alcott Nieriker. My thanks to Routledge, Azelina Flint and Lauren Hehmeyer. Click on my profile for more info. #theforgottenalcott #mayalcottnieriker #amymarch #Routledgebooks #taylorandfrancis
Imagine reading handwritten letters form the March Sisters. How would that change the way you read "Little Women?" Book review: "Letters From “Little Women” Craft Intimacy Between Reader and Alcott’s Beloved Characters" (from BookTrib) @booktrib #littlewomen #bookreview
THIS is a breakthrough study! Discerning Alcott's intent: Reimagining feminism through faith and sisterhood - a review of "The Matrilineal Heritage of Louisa May Alcott and Christina Rossetti" by Dr. Azelina Flint #louisamayalcott #christinarossetti #feminism #faith #mothers