This comment from Diana regarding a previous post prompted a discussion on whether or not Louisa May Alcott was gay:

“What is your opinion of the evidence that she may have had some suppressed passion, such as crushes, on girls? Remember she said in an interview that she had been in love with so many girls in her life. This may have been an almost unconscious part of her complicated character; but it would need to be considered in examining her sexual energy. At any rate, if that energy was channeled into her writing, this aspect of it may have been an added component to the human richness of her genius, giving her an extra sensitive intuition into both sexes.”

It is tricky addressing this subject because the mentality of the nineteenth century was so different from our present day. 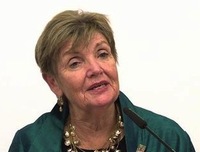 Carroll Smith-Rosenberg, a leading historian on women, undertook a study of relationships between women, studying the personal letters of thirty-five families between the 1760s and the 1880s. Her sample covers a wide spectrum from poor to middle class to well-to-do, and from many geographical and Christian backgrounds. Because the letters were meant to be private, they are quite revealing.

Smith-Rosenberg begins with an examination of two sets of lifelong friends in her essay, “The Female World of Love and Ritual: Relations between Women in Nineteenth Century America”:

“The twentieth-century tendency to view human love and sexuality within a dichotomized universe of deviance and normality, genitality and platonic love, is alien to the emotions and attitudes of the nineteenth century and fundamentally distorts the nature of these women’s emotional interaction. These letters are significant because they force us to place such female love in a particular historical context. There is every indication that these four women and their husbands and families–all eminently respectable and socially conservative–considered such love both socially acceptable and fully compatible with heterosexual marriage. Emotionally and cognitively, their heterosocial and their homosocial worlds were complementary.” (pg. 73, Women and Health in America, First Edition edited by Judith Walzer Leavit)

Rosenberg presents moving stories of intimate relationships which provided emotional satisfaction, support and empathy. These relationships could be quite intense and often lasted for a lifetime. She notes the frequent uses of “I love you,” “dearest,” “darling,” “how desperately I shall want you,” etc. in the letters.

Here is one ending line from a letter between Jeannie Field Musgrove and Sarah Butler Wister:

“Goodbye my dearest, dearest lover–ever your own Angelina.” (They had pet names for each other). Here’s another: “I will go to bed … [though] I could write all night–A thousand kisses–I love you with my whole soul–your Angelina.” (pg. 81)

In the Victorian era, men and women were separated into different spheres, the men living in the world-at-large while women were relegated to the private, domestic sphere. This separation created a stiffness and formality between men and women; in fact, marriage would prove to be a major adjustment: “With marriage both women and men had to adjust to life with a person who was, in essence, a member of an alien group.” (Ibid)

This separation however provided an acceptable social setting for intimate relationships between women. Smith-Rosenberg describes a large network in which women found themselves, beginning first with the family and the mother-daughter relationship. In most cases (barring illness, death, or other such calamity), this relationship was very close with little of the conflict found today between mothers and daughters, especially during adolescence. In fact, there appeared to be an unspoken pact between women to resist the urge to criticize or be hostile. While women were generally discouraged from expressing aggression, Smith-Rosenberg found genuine love and companionship in the letters she studied.

This did not stop women from being catty towards men in the courtship phase. In referring to it as “deprecatory whimsy,” Smith-Rosenberg shared amusing stories and game-playing from young women in their treatment of young men.

Considered perfectly proper for that era, affection was displayed in overtly physical ways; such displays today would raise eyebrows: “Girls routinely slept together, kissed and hugged each other.” Such affection stemmed from deep friendships sharing mutual loneliness and emotional dependency. Women leaned on each other for support, strength and companionship in a world where there were few choices on how they should live. 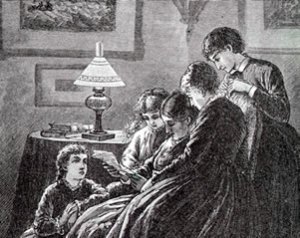 Louisa May Alcott enjoyed many such relationships in her life, beginning with her family. Her love for her mother was fierce, protective and intimate—in many ways she acted as much like a husband to her mother as a daughter. Louisa assured her mother’s place in classic literature as the beloved “Marmee” in Little Women—all knowing, forever patient and kind, and always there for her daughters.

This devotion was also evident between the sisters despite the petty rivalry between Jo and Amy. Often in the book we find the sisters cuddling together reading their special book received at Christmas, sharing confidences and consoling each other through difficult times. Who can forget the picture of Beth, lying in the arms of her older sister Jo at the seashore, sharing her most intimate and painful secrets?

Louisa and her older sister Anna were very close, pining for Anna in her journal whenever Anna went away. When she finally broke away from the family to marry John Pratt, Louisa grieved as with a death. We see this played out in Little Women with Jo’s jealousy of Meg’s future husband John Brook. She is furious that he wants to marry Meg and thus take her away from home. Jo declares her the desire to “marry” her older sister to prevent that separation.

As we can see from Smith-Rosenberg’s essay, these experiences and feelings were commonplace for most women. It is no wonder then that Little Women immediately resonated with readers. Louisa hardly knew what she had tapped into despite admitting she didn’t like girls much nor knew much about them (except for her sisters). Little Women became the story of millions of women across the ages.

And it didn’t stop there. Louisa not only glorified the sisterhood of women, she re-imagined it, especially in An Old-Fashioned Girl and Work A Story of Experience. In each case a sisterhood was created for single and working women intent on making the world a better place. Polly Milton, lonely and poor, gathers together women like herself—purpose-driven, working to support themselves and finding their way in life without husbands. In a similar fashion Christie Devon, recently widowed, brings together married and single women intent on reform.

So, was Louisa May Alcott gay because of her stated attraction to other women? Likely we’ll never know–the nature of relationships between women in the nineteenth century makes it impossible to determine. Smith-Rosenberg’s conclusion of her essay affirms this:

“… in the twentieth century a number of cultural taboos evolved to cut short the homosocial ties of girlhood and to impel the emerging women of thirteen or fourteen toward heterosexual relationships. In contrast, nineteenth-century American society did not taboo close female relationships but rather recognized them as a socially viable form of human contact—and, as such, acceptable throughout a woman’s life.” (pg. 81)

It seems to me that something precious and wonderful may have been lost in the transition to modern life and independence. Certainly the art of from letter writing has nearly disappeared; with email so easily disposed of, what archive will exist of such friendships? Does sisterhood still exist? What do you think

29 Replies to ““A thousand kisses–I love you with my whole soul”: Relations between women in the 19th century, as reflected in Little Women”