This past Sunday, November 8, a group of Alcott enthusiasts had the distinct pleasure of attending a book signing and reading with John Matteson, the editor of The Annotated Little Women at The Concord Bookstore. 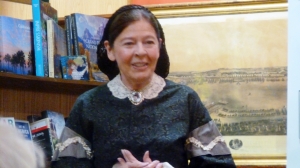 As he was about to speak, we were greeted with a surprise guest, “Louisa” (aka Jan Turnquist) herself! She seemed flummoxed at first by our presence and then astonished as she learned we were about to hear about a gorgeous and rich version of her classic novel. We all smiled knowingly. She saw the book and was pleased at the beauty of the volume and then caught sight of Matteson who introduced himself and kissed her hand.

It was a sweet and humorous moment, a great way to begin this reading.

The connection of family

Matteson went on to speak of his personal connection to Little Women, and how the importance of family brought him to know and write about the Alcotts. He shared of his years as a struggling grad student, married and with a daughter. He became a stay-at-home dad all the while wondering how he would advance in his career as he saw colleagues publishing papers and making names for themselves. This season of waiting would end up becoming a rich time of formation.

Approached for a book project

Publishing his first essay in 2001 in the New England Quarterly (an essay which had nothing to do with the Alcotts), Matteson was approached by a literary agent who wanted to discuss a book project. Matteson had no particular book in mind but the agent in his wisdom, continued to work with him. A book on nineteenth century Utopian communities was decided upon and Matteson began his research by visiting Fruitlands where he first encountered Bronson Alcott. As they say, the rest is history.

Matteson was fascinated by Bronson and decided to write the book about him. As he researched the family, he came to know Louisa and saw some amazing parallels between his life and that of Bronson, both teachers and “quixotic” fathers intimately involved in the raising of strong, “verbal” daughters; for one thing, the age difference between father and daughter were nearly the same (off by just seventeen days).

And thus, the idea of Eden’s Outcasts, a biography of Bronson and daughter Louisa, was born. It would go on to win the Pulitzer prize. Quite a feat for a first book!

How The Annotated Little Women came to be

The love affair between Matteson and the Alcotts continued with his work on The Annotated Little Women. Published by Norton, Matteson was approached by the company to produce this book which is part of their ongoing series of annotated classics. Originally thinking the book would be a simple project, it ended up being an intense and amazing discovery of endless and fascinating connections between the fictional world of the March family and the reality of the Alcotts.

No other book, not The Wizard of Oz, Alice in Wonderland nor any other classic can boast the intimate connections that Little Women can. There are no silver slippers from Oz but there are real artifacts from Louisa May Alcott’s Orchard House. The coffers were opened to Matteson revealing astonishing links: Meg’s (Anna’s) wedding dress, Louisa (Jo) and Lizzie’s (Beth) sewing kits, May’s (Amy’s) foot cast, Abba’s (Marmee) chess set … the list goes on and on; Matteson connected such artifacts to actual passages in Little Women. These artifacts, not normally available for public viewing, are on display at Orchard House during the month of November. Photographs of these mementos appear throughout The Annotated Little Women.

Matteson told fascinating stories about some of the other 220 illustrations in the book. He cited a passage where Amy, writing from Europe, described a purple dress (which she thought horrid) worn by the Empress of France. Matteson then gave the background: how a chemist discovered the color of magenta, how the Emperor Napoleon III had won a military victory in the town of Magenta, and how the Empress wore magenta dresses in honor of husband whenever she could to honor him in public.

He spoke about the seemingly random inclusion of a photograph of a queen from Hawaii whom Louisa happened to spot during her trip to Europe–Amy writes of this in her letters home to her family.

By far the most interesting connection was the inclusion of a precious artifact belonging to Matteson, a simple autograph of Bronson with the phrase, “Follow the Highest!” (found on page 347). Earlier in his talk Matteson spoke of an unfavorable review of Eden’s Outcasts by Publisher’s Weekly, leaving him feeling dejected. It took the wisdom of his then thirteen-year-old daughter to remind him of his reason for writing the book: because he had something unique to say and people needed to hear it.

Looking out intently at his audience, he urged us all to do the same: “Follow the Highest!” Many of us left that book signing with far more than an autograph inscribed in our books.

Thank you John Matteson for retaining that true teacher’s heart so present in the spirit of Amos Bronson Alcott.

p.s. Don’t miss the special exhibit of artifacts at Louisa May Alcott’s Orchard House only through the month of November. See locks of hair from Louisa and Lizzie, Abba’s chess set, Lizzie’s sewing box and New Testament, and more!

Are you passionate about
Louisa May Alcott too?
Subscribe to the email list and
never miss a post!
Keep up with news and free giveaways on Susan’s books,
Louisa May Alcott: Illuminated by The Message, and River of Grace!
Facebook Louisa May Alcott is My Passion
More About Louisa on Twitter

4 Replies to “Fun, surprises and inspiration at John Matteson’s book signing of The Annotated Little Women”

Lisa Francesca, who is currently researching Carlotta Norton Smith, an art editor in New York’s Gilded Age, explores art periodicals and their pieces on American women artists , and speculates on the impact of May's "Studying Art Abroad." #mayalcottnieker #womenartists19thcentuty #TheForgottenAlcott
This is an incredible series available on Zoom all next week. Videos will be available on demand if you can't watch the conference live. Discussions will take place after each presentation. See my blog post for registration details. Hope to see you there! #louisamayalcott #bronsonalcott #louisamayalcottsorchardhouse #summerconversationalseries2022 #lifelonglearning
Author Lorraine Tosiello takes us on a tour of Louisa May Alcott's Boston. @ltosiello_author #louisamayalcott #historicboston #beaconhill