I am glad that I somehow got the idea from another blog that Mac and Rose did not get together. It pained me to see how Mac wooed her and she would not give in. When he shared his Thoreau essays with her and found them well received, it pained me again. So you can imagine my surprise and joy when in fact, the story of Rose in Bloom ended exactly as I hoped it would. 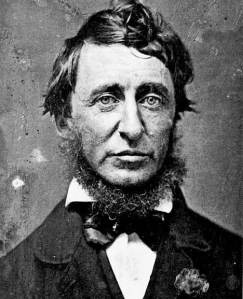 I had to smile at the injection of Henry David Thoreau into the story. Louisa was not shy in showing her immense admiration of the man. I think Mac was the best representation yet of Thoreau—a seeker both intellectually and spiritually. Mac was a Thoreau who grew into the idea of sharing his life with a woman and finding happiness and fulfillment in that relationship.

Perfect pairings but no perfect marriages

While David Sterling was also a Thoreau-like figure who gave his life to Christie Devon in Work A Story of Experience, there was something more satisfying to me about Mac. Louisa, however, never took the relationships beyond the marrying: David was killed off in the Civil War, and Rose in Bloom ended with Mac and Rose agreeing to marry. I realize that Louisa, having never married herself, perhaps did not feel qualified to explore marriage but I would have like to have seen her ideal of marriage played out. She certainly did a fine job of describing Meg’s marriage to John (particularly when it came to raising the babies).

Phebe was finally accepted into the family because of her care of Uncle Alec during his illness. It’s unfortunate that she had to prove her worth in order to be accepted, considering the fact that she was already worthy despite not coming from a noted family. I was glad to see that Aunt Plenty came around although I had to wonder if she would have had Uncle Alec not survived.

So all was well that ended well. I enjoyed Rose in Bloom very much with its overall theme of talent versus genius and the conclusion that one could be a genius at things not associated with the fine arts (in Rose’s case, in giving to others). Dr. Cathlin Davis was indeed correct about Louisa’s premise that love was the necessary element to spark true genius as love prods us to move beyond ourselves to something bigger.

Adult issues such as alcoholism (see previous post) and single parenthood were also explored. Louisa had a remarkable talent for introducing potentially controversial issues in such a stealth manner such that one never notices they are in fact controversial; it was part of her own genius. It’s interesting to me that she introduced the idea of a single woman adopting a child before she had done it herself with Lulu. It reveals a longing that May’s tragic death was able to fulfill.

Rose in Bloom was a satisfying read and I thank everyone here who so heartily recommended it. You, dear readers, are the experts on Louisa’s canon and I appreciate you educating me.

Which book shall we discuss next? Leave a comment with your suggestion.

Are you passionate about
Louisa May Alcott too?
Subscribe to the email list and
never miss a post!
Keep up with news and free giveaways on Susan’s book, River of Grace!
Facebook Louisa May Alcott is My Passion
More About Louisa on Twitter

6 Replies to “Rose in Bloom: Endings and beginnings”