Jo’s Boys is tinged with sadness. And wistfulness. Louisa worked on Jo’s Boys for seven years beginning in 1879, the year her youngest sister May died six weeks after bearing her daughter Lulu. Abba, known as “Marmee” had died in 1877.

Chapter Two, “Parnassus” has us visiting the palatial home of Laurie, Amy and Bess, built on the grounds of Plumfield. Louisa goes to great pains to remind the reader that although wealthy, Laurie and Amy put their money to good use. They were “earnest, useful and rich in the beautiful benevolence which can do so much when wealth and wisdom go hand in hand with charity.” (Jo’s Boys, page 26).

Tributes to the family

The home was “full of unostentatious beauty and comfort” which included busts of John Pratt and Beth (lovingly created by Amy) and portraits of Mr. Laurence and Aunt March. A memorial to Marmee consisting of a portrait surrounded by green garland was in the place of honor. Undoubtedly Louisa was writing about Abba with these lines: 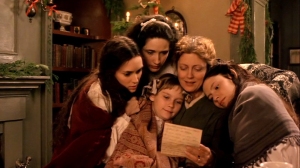 “The three sisters stood a moment looking up at the beloved picture with eyes full of tender reverence and the longing that never left them; for this noble mother had been so much to them that no one could ever fill her place. Only two years since she had gone away to live and love anew, leaving such a sweet memory behind her that was both an inspiration and a comforter to all the household.” (Ibid, page 33)

The March sisters versus the Alcott sisters

The March sisters are shadows of the real women upon which they were based. Meg is Anna without Anna’s angst and secret creative urges. Beth is Lizzie without the profound suffering she endured in her death. Jo is Louisa, tamed. Amy is May without the physical energy, ambition, independence and high spirits.

Amy started out like May but like Jo, was tamed. She became a wife and mother, laying aside her ambitions as a professional artist. Like May she was tall and gracious, giving off the impression of beauty even if her features were a bit irregular (remember the nose). Amy however returned from Europe with Laurie while May remained in Europe, pursuing her art with committed passion, eventually knowing success with two paintings put on display in the Paris Salon.

May married a much younger man and they had a child, Lulu. Tragically, May died six weeks later. We were never to know how this modern, independent, career-minded woman would have blended her work with marriage and mothering.

Louisa gives us a clue of her wish for May in Jo’s Boys.

Amy lived out her dream as an artist by mentoring younger artists. Her own Bess was a committed to art and mother and daughter were devoted to each other and their art. Bess at fifteen resembled Amy with her “Diana-like figure, blue eyes, fair skin, and golden hair, tied up in the same classic knot of curls. Also,–ah! Never-ending source of joy to Amy,–she had her father’s handsome nose and mouth, cast in a feminine mould.” (Ibid, page 28)

Would mother and daughter have gotten along?

Amy and Bess were much alike: gracious, feminine yet fiercely devoted to their passion. There was a peaceful harmony between them. In real life May and Lulu were also alike both in appearance and personality. Their similarities, however, might not have produced the harmony that Louisa dreamed up for Amy and Bess. Lulu was described by Louisa as willful, physical and spoiled, much like the Amy (and May) of childhood.

May as a mother and artist

All this bring about tantalizing thoughts: how would May have dealt with a younger version of herself? I’m guessing the battles could have been epic and the love fierce and loyal. Nothing was said about Lulu having the artistic ability of her mother so we will never know if they would have shared that passion as Amy and Bess did. It would have been a lot of fun to witness their relationship.

It’s hard to know whether May died before or after chapter two was written. The poignancy of Louisa’s loss, however, is there in any case. She gives May her happily ever after with her daughter in the guise of Amy with Bess.

How do you think May and Lulu would have gotten along? Could May have juggled career with motherhood?

19 Replies to “What would May’s life as a wife, mother and artist have been like had she lived? Jo’s Boys gives us a hint.”

@booktrib Book Review plus Q & A with author @virginiakantra: "Beth and Amy" #bethandamy #megandjo #booktrib #littlewomen
Can't wait for this! Let Genius Burn - the podcast on Louisa May Alcott
This is so lovely! Apparently May Alcott was not the only artist in the family. Just saw this today at the Fruitlands Museum Art exhibit. It'll be on display until August 22. #louisamayalcott #fruitlands #ragdoll #littlewomen