Note: I missed Day 3 of the series because of my trip into Harvard’s Houghton Library. For any of you who follow me on Facebook, you’ll know that I scored big on this trip. I photographed a total of twenty-five letters, five of which come from Lizzie (and they are lengthy). It will take a while to sort through them all but I will share things with you in the coming days.

Day four began with a lively presentation by Jayne Gordon of the Massachusetts Historical Society. Titled “’First Live, then Write:’” Louisa May Alcott and Hospital Sketches, Gordon shared her depth of knowledge of the Civil War, citing letters from Concord soldiers (of which there are many; Louisa knew of these soldiers from childhood). As they marched off to war Louisa felt a burning desire to join them. It was not enough to sit at home with the women sewing. She wanted to do something and there was something she could do: be a nurse.

The nursing profession had been previously closed to women but with so many men going off to fight, that restriction had to be changed. Dorothea Dix was appointed by the government to set up hospitals and find nurses. In order to be accepted you had to be thirty or over, plain and simply dressed, and have good moral character. Louisa would turn thirty on November 29, 1862 and was off to Washington DC’s Union Hotel Hospital on December 11.

According to Gordon, many women go off to war not only to offer their help but to seek adventure. Certainly in Louisa’s day there were few options for women outside of the home. Louisa, a sheltered spinster, longed to experience life in all its glory and with all its raw energy. She truly had no idea what she was getting herself into but she dove in without question. 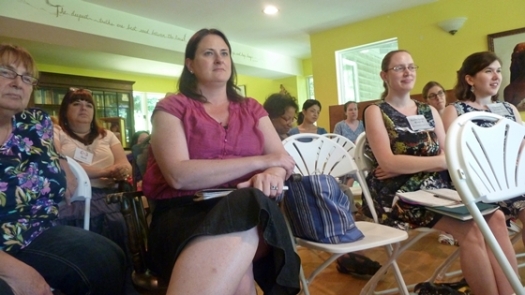 One of the first major hurtles she had to overcome was a delicate one: the Victorian propriety with regards to women and men. Her first duty upon arrival was to bathe the soldiers. Louisa had not seen a naked man before and found it difficult at first to perform her duty. Famed Civil War nurse Clara Barton had also confessed to this problem. Propriety however did not apply in this situation and both women were able to perform their duties.

Life in the military

Gordon mentioned another interesting problem that vexed Louisa and the other nurses: the peculiarity of being ordered around by the doctors as if they themselves were soldiers. Hannah Stevenson, a colleague of Louisa’s wrote that the work of nursing would be “easy” if not for the military aspect.

Despite the difficult adjustment to a completely different way of life, Louisa enjoyed her first taste of this raw life. She soaked in her surroundings, the good and the bad, and wrote passionately about them in letters home to the family.

Louisa’s personality (game for anything) and experience with nursing (she nursed Elizabeth through her long illness) made her an excellent nurse but her career was short-lived. Only six weeks after arriving in Washington she caught typhoid and became alarmingly ill. Her father had to be sent for and he brought her home to Concord where she suffered from a high fever and delirium for weeks and convalesced for months afterwards.

Her service had not ended however. Letters sent home to the family chronicling her experience were serialized in The Commonwealth newspaper and eventually became Hospital Sketches in August of 1863. It was the book where Louisa found her voice. She wrote with great humor and pathos, describing the chaos of traveling to Washington, the nightmare of receiving the wounded from the Battle of Fredericksburg only days after arriving, and the sorrow of losing one special soldier, John Suhre. Hospital Sketches was the first of many books chronicling Civil War experiences and the public, hungry for any word, eagerly received Louisa’s book. As she would do throughout her professional writing career, she gave the public what they wanted.

Tomorrow I will fill you in on two other outstanding presentations for the Summer Conversational Series, by Cathlin Davis and John Matteson.

2 Replies to “On vacation with Louisa May Alcott: Last Day of the Summer Conversational Series – Being and Doing: Louisa explores herself and her beliefs through her writing (Part One)”