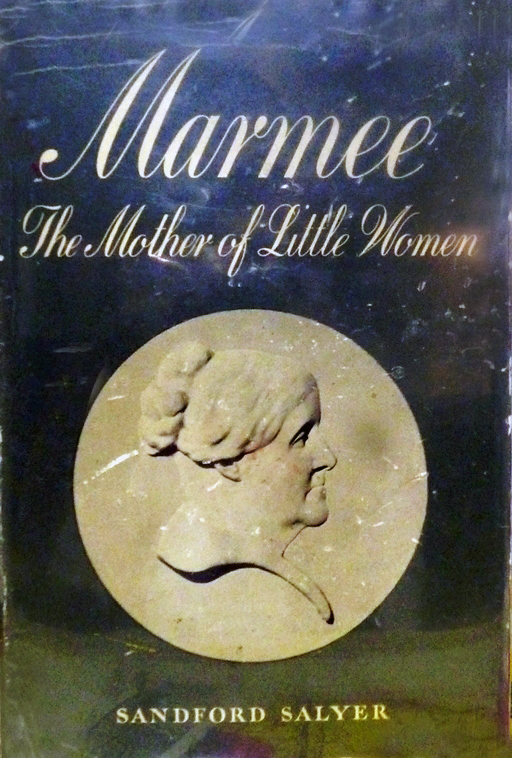 Quite a while ago I promised to write more on Marmee, the Mother of Little Womenby Sandford Meddick Salyer and as usual, I got sidetracked (have to stop going to the library! :-)). As I mentioned before in my first post, this book was a very pleasurable read chock full of information. Salyer did his homework. It read more like a memoir but nevertheless, I learned a great deal about how Abba, and family life, shaped the two most successful Alcotts, Louisa and May.

I also got some tantalizing new tidbits about third sister Lizzie (Beth in Little Women), known as the “shadow sister” because she was so meek and mild. Lizzie is a total mystery to me. All the other sisters candidly spoke of themselves and were sufficiently introspective in their journals and letters while Lizzie showed no introspection, her journal entries being very plain and factual. Here’s a sample:

Sunday, 19 April [1846] … Father walked in the woods with us.  We saw some pretty trees to set out in the yard at home.  I read in the “White Rose” and cleared out my trunk..  We went on the hill to see the rainbow, it was very beautiful.  Abba [May]and I went to the brook.  I sewed a little in Louisa’s room.

Monday 20…I picked blue violets and dandelions.  At ten I came into school and wrote my journal for Sunday and this morning.  I did some sums in long Division and read a piece of poetry with father.

Tuesday 21 …It was a beautiful evening. I made my bed and cleared mother’s room…I sewed some before I came into school and drew this little map of our place, but could not do it very well so father helped me about it.

From Madelon Bedell’s footnotes, p 247-8. Full text in Houghton Library, Harvard University, Alcott Pratt collection (my thanks to Harriet Reisen for sending this to me).

Was she the odd one out, not having that quality of introspection? Or was she so very painfully private that she never dared show her inner self? When she died, she did not go peacefully into the night as Louisa described in Little Women. In death as she never did in life, Lizzie showed anger and frustration, lashing out at family members (described vividly in Martha Saxton’s biography Louisa May: A Modern Biography and also in Susan Cheever’s Louisa May Alcott A Personal Biography). Did she feel her painful, lingering death was unjust given that she had been so good in life? We will never know. Death has a way, however, of unmasking the truth and it leads me to believe there was more to Lizzie than met the eye (Madelon Bedell in her biography The Alcotts: Biography of a Family apparently felt that way too with her caption under Lizzie’s one known picture mentioning a “sly smile.”).

Lizzie did, however, come by her peaceful and serene manner honestly and not just through Bronson. Salyer notes on page 23 that Abba’s sister Eliza was very much like Lizzie (in fact, Colonel May thought that Abba and Bronson had named Lizzie after Eliza even though she was really named after Elizabeth Peabody).  Bronson called Lizzie his “psyche”, his soul mate (or better yet, a perfect reflection of himself.)

Dr. Frederick Llewellyn Hovey Willis in his book, Alcott Memoirs, described each of the Alcotts. As a young man going through school, Willis boarded often with the Alcotts; in fact Marmee practically adopted the orphaned Lew.  Salyer quotes Lew on page 120:

“So also was that of Elizabeth as far as the beauty of that spiritual nature could be captured in words. Willis’ picture agrees with all the others that we have of her: ‘She was possessed of an even, lovable disposition, a temperament akin to Mr. Alcott’s – indeed, more than akin, since it was a very counterpart. Under any and all conditions she was a sunny and serene as a morning in June. Her appearance was that of a typical Puritan maid. She loved music, played the piano with more ease than any of her sisters and with something of real appreciation.’ “

Was music her expression?

There are two kinds of musicians – the technicians (like my husband) who read and write down music easily and can comprehend musical theory. They usually have mathematical minds. Then there are the ear people (like myself) – we can’t read as well because our ears pick up the music faster than our minds can comprehend the theory. We are not mathematicians. I had read somewhere that Lizzie showed possible mathematical ability (note the mention of long division in her journal entry) so that would lead me to believe she was more like my husband. One thing is for sure though: music is an emotional experience, to the player as well as the listener. My husband and I, although we approach music very differently (and have very different tastes) both feel music intensely. Can I assume also that Lizzie nurtured an inner life through her music? Was that her way of expressing her inner life, all the while keeping it a secret? Again, we will never know (though I plan on exploring this further).

This is why I found Marmee, the Mother of Little Women so enjoyable, because it contained such rich (and to me), new information about all the Alcotts. It was way more than a pleasant memoir about Abba.

In future posts, I will dig deeper into the heart of this book.

4 Replies to “Continuing with Marmee, the Mother of Little Women: tantalizing look into Lizzie Alcott”